Federation Cup champions Dempo's title hopes in the National Football League suffered a jolt after they were held goalless by Mahindra United at the Nehru stadium, in Fatorda, Goa, on Thursday.

Dempo could have won by at least a two-goal margin had their forwards not been wayward. Isfaq Ahmad was their worst offender, frittering away three chances.

Dempo midfielder Clifford Miranda was adjudged the man of the match.

It was a tale of missed chances for Dempo, who called the shots right through. The absence of their ace striker Ranty Martins, who had to sit out on account of being booked with two yellow cards, was badly felt.

Dempo had a chance to surge ahead in the 15th minute, when Clifford Miranda laid a pass to R C Prakash, whose shot hit a rival defender and deflected towards Ishfaq Ahmad, whose bicycle kick went wide.

Then, in the 22nd minute, Dempo had another chance to score but Ishfaq wasted the opportunity with only the goalkeeper to beat.

A minute before the breather, Dempo almost forged ahead after Majek Bolaji put Prakash in possession, but the last-named shot into advancing goalkeeper Sandeep Nandy.

Mahindra had only one notable move in the first session when Peter Sidique's free-kick went over the bar in the fourth minute.

The second half was a repeat of the first, as Dempo continued to call the tune but fail to score.

Even Elephants Need A Dentist! 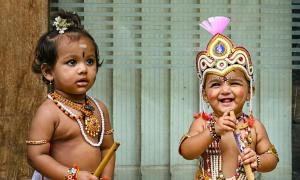 When Children Dressed As Lord Krishna