'Awesome to better your record'

Viswanathan Anand created history at Amber, winning all the three titles -- rapid, blindfold and combined -- at stake in the 14th edition of the tournament.

In the process, he repeated the feat he first performed in the 1997 edition of the event and became the only player to do so. 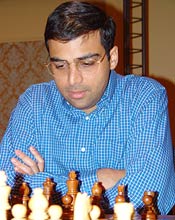 The Indian ace recorded an overall tally of 15.5 points, which, in the end, was 2.5 points more than that garnered by Alexander Morozevich, who finished second.

The triumph was in sharp contrast to the Indian ace's showing at Linares last month, when he failed to live up to his high standards, and finished third, behind Veselin Topalov and eventual winner Garry Kasparov.

Soon after winning the Linares title, Kasparov, arguably the greatest chess player ever, announced his retirement from competitive chess.

In an e-mail interview with rediff.com Sports Correspondent Harish Kotian, Anand reflected on his Amber triumph and the impact Kasparov's retirement could have on competitive chess.

This was the second time you won all the three titles at Amber, the first being in 1997. Which do you rate higher, the one in 1997 or this?

When I won all three categories in 1997, it seemed that it would be quite tough to repeat. This year I would say my win was much smoother. I was 7.5/8 after the first four games and, somehow, this augured well about my chances to win the tournament.

The Amber event has become increasingly tougher in the last four years. The field comprises of the absolute elite, so my win this year against a stronger field, and with such a margin, is surely a notch up.

Actually, after Linares, I wanted to take a respite from chess. In fact, after playing the last game with Michael Adams I didn't open my computer till I actually got to Monaco. We (Anand and wife Aruna) even managed to do two days of sightseeing of Toledo. When I got to Monaco I think my hands were really itching to start up the machine.

Which tournament would you say was tougher or harder fought -- the one in 1997 or this?

In the blindfold, I played some very nice games against Veselin Topalov, Loek Van Wely and Vladimir Kramnik. In Monaco, usually players do well in one category and falter in the other. I guess you either prefer to play without seeing your pieces or you like playing rapid.

In the rapid, there was more competition. Also, my only loss in the tournament came in the rapid. The two games where I was in danger were against Evgeny Bareev and Van Wely, in the rapid. So, yes, the rapid tended to be the place where the action was. The unique nature of the event is seeing players blunder pieces with their eyes closed and within an hour they play like geniuses or the other way round.

How does it feel to be the only player to achieve the feat of winning three titles on two occasions?

In 1997 I had won the event and rapid with a round to spare. But in the last round I lost my rapid game against Jeroen Piket, but ended up winning all three anyway. Somehow, it felt like you had won the war but lost the battle. (Right: Anand and Morozevich during their blindfold game at Amber 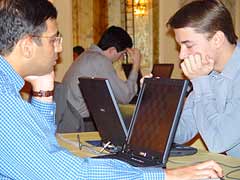 This time I just wanted to finish the tournament well. In fact, in the penultimate round, Peter Svidler congratulated me on winning the event. I said I had only a point lead in the rapid and wanted to wrap up the rapid without too much suspense. It is a luxury to have this kind of margin in such a strong field. There were already many jokes in the press room, of how there was the Anand tournament and the other tournament. I just decided to play each day and play each rival rather than start getting ahead of myself. But, of course, it is an awesome feeling to better your own record.

Don't you think it is unfair that the event is not counted as a rated event by FIDE, the world chess federation? Had the ratings of these events been calculated, you would have crossed the 2800 mark.

If all my rapid games were actually rated, even with a less weightage, I would be somewhere closer to 3000. Just joking! This is one of the quirks of the chess world. My policy is to just play chess, whether rapid, blindfold or classical. At the end of the day we play chess and if the spectator enjoys what we do then we have done our duty.

Garry Kasparov has retired from the game.

He seems to have had his reasons or political ambition, as he has mentions. He is clearly in the league of the all-time greats, like Bobby Fischer.

Do you think he is the greatest chess player ever?

He has a phenomenal record, though comparisons between players of different generations are meaningless.

How will Kasparov's retirement impact the game?

The last few years he played relatively infrequently. However, he has been such a presence for so long that it will take some time to get used to his absence.

'I really want to beat Kasparaov'

Any memorable incident with Kasparov?

The most memorable was the photo we took on the 108th floor of the Twin Towers in 1995. He once mentioned in an interview about my play: 'Imagine if Anand was actually born in the Soviet Union; how much more dangerous he would have become.'

'I have many more years of chess left in me'

What tournaments will you be participating in the future?

I will be playing in Sofia, Bulgaria. I visited Sofia last year and enjoyed it a lot. The tournament will be a very strong classical chess event with Topalov, Kramnik, Judit Polgar, Ruslan Ponomariov, Adams and myself. This event will be played between May 10 and 23. I will also play a rapid event in Leon, Spain, (June 8 to 13) with Alexei Shirov, Magnus Carlsen and Rustam Kasimdzhanov.