On Tuesday all Indians were on cloud nine with Major Rajyavardhan Singh Rathore winning the country's first ever individual Olympic silver medal.

On Thursday, the country hung its head in shame as two Indian women weightlifters  Sanamacha Chanu in the 53kg category and Pratima Kumari in the 63kg division  tested positive for banned performance-enhancing drugs. 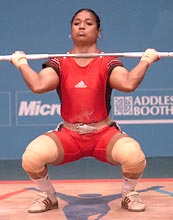 Pratima Kumari was the first to be caught. She was among five weightlifters who tested positive for drugs even before the Athens Olympics began and was banned from the Games. But the Indian delegation hid the fact from the country until the event actually took place, when it was found that Pratima Kumari's name was not even on the starting list.

Even then, Indian officials did not care to explain her absence. Only on Thursday was it revealed that Pratima had been debarred when the International Weightlifting Federation announced that five weightlifters had failed the drug tests. The other culprits were Wafa Ammouri of Morocco, Victor Chislean of Moldova, Zoltan Kecskes of Hungary, and Shabaz Sule of Turkey, who stood fifth in the women's 75kg category at last year's World Championships.

If that was bad, worse was to come. Later in the evening, Harish Sharma, deputy chef-de-mission of the Indian contingent, told the Press Trust of India that Chanu, who had finished fourth in the 53kg category, had also failed a dope test. "She was tested after her event and the International Olympic Committee informed us of the result today," he said.

Earlier, IWF president Tamas Ajan had told a press conference that another Indian woman lifter had tested positive for a banned diuretic, but did not reveal her identity, saying it was up to the International Olympic Committee. Ajan's statement came as a blow to the Indian team following the suspension of Pratima Kumari, who was

India's second entry in the 63kg division, but opted out of the event citing back pain.

According to information, Pratima had pulled out of the competition two days ago, but the media in Athens was kept in the dark about the development.

It is learnt that the 28 year-old Pratima, a double gold medallist at the Manchester Commonwealth Games in 2002, returned the positive test during a pre-Olympic anti-dope campaign which began on July 30.

Pratima had suffered a back injury during training in Belarus in June-July and was hardly in contention for a medal in the 63kg category, which saw another debacle in Karnam Malleswari's shock no-lift on Wednesday.

Indian officials, including Indian Olympic Association President Suresh Kalmadi, refused to confirm or deny the disgraceful development, only saying they would hold a meeting soon to take stock of the matter.

In April, another Indian woman weightlifter, 24 year-old 2002 Commonwealth Games bronze medallist S Sunaina, tested positive for nandrolone during the Asian Championships at Almaty, Kazakhstan, in April. She was stripped of the two bronze medals she won in the 53kg category and is currently serving a two-year ban.

Last year, Shailaja Pujari, who won three gold medals in the 75kg category at the Commonwealth Games, was banned for two years by the Indian Weightlifting Federation after she tested positive at a domestic meeting.

At the Busan Asian Games middle distance runner Sunita Rani, who won a gold medal in the 1500 metres and a bronze in the 5000m, was disqualified after a banned substance was allegedly detected in her urine sample. But she was later given a clean chit because of procedural lapses in the testing of her samples and her medals were returned.

India also had to pull out its team from the Junior Asian Weightlifting Championship in 2003 after 24 lifters were found guilty of doping in the junior nationals in Chennai.

Kunjarani Devi, who finished fourth in the women's 48kg event at Athens, had also tested positive in a senior Asian competition in South Korea in 2001 and was banned for six months and stripped of the bronze medal she won there. She was among 34 lifters, 23 of them juniors, who were caught for doping in three national meets which came soon after seven lifters tested positive during the 2002 National Games.

Weightlifting has been dogged by doping scandals for years and the sport was hoping the Athens Olympics would improve its image. Every weightlifter had to undergo a doping test before being allowed to participate.

Burmese woman weightlifter Nan Aye Khine was the first in the sport to be expelled from the Olympiad on Monday after testing positive for a banned steroid. The 27 year-old was stripped of her fourth-place finish in the 48kg category held last Saturday.

Weightlifting's place on the Olympic programme came under threat after a wave of doping cases four years ago in Sydney.

The Bulgarian team was stripped of three gold medals and sent home from the 2000 OIympiad. Olympic officials flashed the International Weightlifting Federation a yellow card and ordered it to clean up the sport.

Eleven lifters from 10 nations tested positive at the 2003 World Championships, including China's Shang Shichun, who broke three world records on the way to gold in the 75kg category.

Bulgarian Olympic champion Galabin Boevski was subsequently banned for eight years for tampering with his urine sample at the world championships.

Two days before these Games opened on August 13, the Canadian women's weightlifting coach said drug cheats could rob his top performer of any chance of a medal in Athens.

Maryse Turcotte, fourth in the 58kg division in Sydney, would be lucky to finish sixth this year, coach Pierre Bergeron said, because doping was still going undetected.