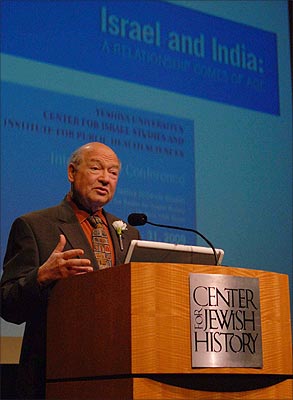 International sanctions need to be imposed on any government that helps terrorists anywhere in the world, New York Democrat Gary Ackerman, who is serving his 14th term in the United States Congress, stated on Monday.

Ackerman, who was addressing the audience on the inaugural day of a two-day conference on 'Israel and India: A Relationship Comes of Age' in New York, did not name any country. But he mentioned that meeting was taking place under the shadow of the memories of the victims of the terror attack on Mumbai.

"The attack in Mumbai had very significant characteristics. The targets were chosen specifically to link the attack with the larger global Jihadi movement. The attack on the Jewish cultural center and luxury hotels suggest that the attack was not just about Kashmir, but it was about an announcement by Pakistan-based terrorist group Lashkar-e Tayiba that they have adopted the larger goals espoused by the Al Qaeda," Ackerman, who is the chairman of the House Subcommittee on the Middle East and South Asia, said.

'The (attack on the) twin towers in Mumbai were more than tragedies. They should serve as instructive lessons. And one of the lessons that we must learn is that if we do not visit bad neighbourhoods, they will visit us. It does not matter whether the group calls itself Al Qaeda, Taliban, or whatever," he stated.

"Whatever legitimacy these groups wanted to claim, and I do not grant them any legitimacy whatsoever, such claims that they would make are superseded by the horrific methods that they used to pursue their goals. And any government that gives them aid and comfort deserves international condemnation, isolation and sanctions," he said.

The international conference was organised by the Yeshiva University's Center for Israel Studies and Institute for Public Health Sciences.

As part of the conference, the university also organised an exhibition at the University Museum on Jews from India. The exhibit, titled 'From Malabar and Beyond: The Jews of India' was dedicated to the victims of the Mumbai terror attacks.

The speakers that included both Indian and Israeli scholars dwelt at length on the cultures of India and Israel, their common values, the democracies and why it took a long time for India-Israel relations to come to fruition, despite commonalties.

The answers came from people like P Kumaraswamy, professor of international relations at the Jawaharlal Nehru University in New Delhi, who spoke on how Indo-Israel relations, almost non-existent in the 1950s, has evolved into a burgeoning friendship since 1992.

"It should not be a surprise to anyone as to why these relations have come closer. What is most surprising is that forging this relationship has taken so long. Both countries have a deep commitment to democratic government, pluralism and open societies and their economies are growing. With such foundation, it is unfortunate that so much of their energy is concentrated on security. Both nations should increase their anti-terrorism efforts and defense cooperation," Ackerman said.

"Israel has become India's largest arms supplier. The sale of advanced early warning aircraft, the joint development of surface-to-air missiles, the launch into space of an Israeli satellite on top of an Indian rocket and high level meetings between senior defence officials of both nations, all speak to the depth of the defence cooperation between India and Israel," he said.

"I would make a suggestion. All three nations, Israel, India and the US should have regular tri-lateral meetings at the most senior levels of governments. The issues that face all three nations are complex and politically sensitive. These discussions need to take place at the level where political as well as policy decisions get made," Ackerman said.

Image: Gary Ackerman at the conference on 'Israel and India: A Relationship Comes of Age' in New York

Nariman House: Diary of an eyewitness