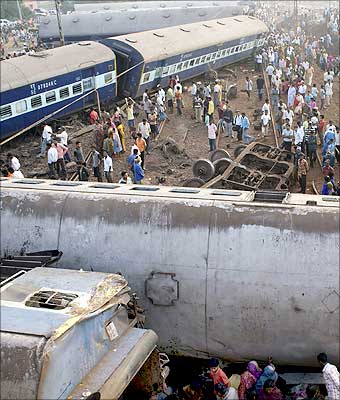 A day after the gruesome train tragedy in Orissa, the Railways has scaled down the death toll from 16 to nine.

Minister of State for Railways R Velu, who visited the accident site, said only nine persons were killed in the mishap that took place on Friday night when the Chennai-bound Coromandel Express from Howrah derailed while changing tracks.

"Nine bodies have been recovered from the site. A higher death toll was anticipated earlier on the basis of preliminary assessment," Velu told reporters at Jajpur Road.

He said only 45 of the injured passengers were admitted to different hospitals where the condition of six was stated to be critical. Most of the injured were discharged after first aid, he said. Earlier, railway officials had put the toll at 16 passengers killed and 161 injured.

Sixteen passengers were killed and 161 injured when 13 bogies of the Chennai-bound Coromandel Express from Howrah derailed while changing tracks in Orissa's Jajpur district. The toll can go up, indicate news reports.

Director General of Police Manmohan Praharaj said 16 passengers were killed, while over 160 were injured, with the condition of many being serious. The driver and the assistant driver of the train were seriously injured.

The bodies of the killed passengers have been recovered, he said. The casualty figure was likely to mount as some bodies were feared trapped in the bogies, some of which had climbed on adjoining ones, railway sources said.

The injured were shifted to the local hospital and the SCB Medical College Hospital at Cuttack, about 60 km from the accident site, railway sources said. Medical teams and ambulances were mobilised from Jajpur, Cuttack and adjoining districts to ferry the injured to hospitals.

Though rescue operations were initially affected due to the darkness, flood lights were rigged up. Orissa Disaster Rapid Action Force teams joined the rescue operation with high-tech equipment.

East Coast Railway General Manager A K Goyal, along with senior railway officials rushed to the site, while Railway Board chairman S S Khurana was likely to visit the spot.

As directed by Orissa Chief Minister Naveen Patnaik, Finance minister Prafulla Ghadai and Women and Child Development minister Pramila Mallick, both of whom belong to Jajpur district, have rushed to the site.

Railway Minister Lalu Prasad Yadav said that a probe will be ordered into the accident.

He also announced Rs five lakh and a job for the next of the kin of the dead, Rs 50,000 for the seriously injured and Rs 10,000 for those with minor injuries.

Free treatment to all injured in the accident has been assured by the Railway Minister. "Minister of State of Railways R Velu, Chairman of the Railway Board S S Khurana and Board member (Engineering) S K Vij will reach the accident spot on Saturday and make an assessment of the incident," Prasad told reporters.

The bogies had rammed in to each other so badly that the passengers were stuck inside and steel cutters, cranes and other equipment were being used to get them out of the mangled bogies, officials said.

All trains on that route have been diverted from Bhubaneswar towards Sambhalpur, the railway officials said.

Image: Onlookers stand near the derailed bogies of the train.