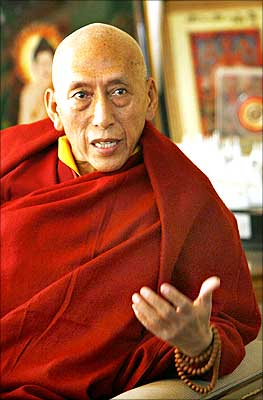 Tibetan leaders and representatives from all over the world on Monday began a historic "special meeting" in Dharamsala, seat of the Tibetan government-in-exile, to discuss the future course of action on Tibet as dialogues with Beijing to address the sufferings of the Tibetan people and improve the current situation inside the Himalayan region failed to make any progress.

Some 581 Tibetan representatives from all over the world are taking part in the six-day meeting, making it the largest political meeting of Tibetan exiles ever held since coming into exile in 1959.

More than 17,000 Tibetans in Tibet have also contributed their say on the meeting, and a summary of their opinion and views have been prepared and would be discussed during this important "special meeting".

According to the speaker of the Tibetan Parliament-in-exile Karma Chophel, the summary of their opinion, procured by the Kashag (Tibetan Cabinet), showed some 8000 Tibetans willing to follow the direction and decision taken by the Dalai Lama, more than 5000 of them opting for "complete independence" and almost 3000 of them showing support to the middle-way approach.

Prime Minister of the Tibetan government-in-exile Prof Samdhong Rinpoche, however, in his speech on Monday, ruled out the prospect of any change in policy from the meeting and said the meeting should not turn out into a "debate between political organisations and rigid political ideologies".

"Any change in policy need not come from this meeting," Prof Rinpoche said.

Rinpoche argued that the present policy, adopted by his government that seeks genuine autonomy for Tibetan people within the constitutional framework of the People's Republic of China, has public mandate and added that there was no reason to seek further public support for it.

Rinpoche said his administration's policy was on par with a unanimous resolution adopted by the Tibetan parliament on September 18, 1997, which offered His Holiness the Dalai Lama full mandate to decide on the policy and direction of the Tibetan struggle, from time to time, keeping the global trend and other factors into consideration.

To carry out any change in basic policy, Rinpoche said, it should be done in a democratic process with the mandate of the Tibetan people.

While clarifying "many speculations and misunderstandings" about the purpose of holding the special meeting, the Tibetan PM said his administration had no "hidden agenda and plan" behind it.

He said his administration had also clearly instructed the Central Tibetan Administration officials attending the meeting to freely raise their concerns and express their views, irrespective of the CTA's standpoint and policy.

He said the Kalons (cabinet ministers) even requested that they be excused from attending the group discussions to avoid overwhelming the conference with his administration's view and policies, but said their permission was not granted.

"As such this meeting is an opportunity for the Kalons to listen rather than voice its thoughts," Rinpoche said.

He emphasised that meeting must instead concentrate on making efforts "to find a solution to the issue of Tibet" by taking into consideration the "seriousness of the situation in Tibet and the unspeakable sufferings of Tibetans in Tibet since March this year."

"At this Meeting, by taking into account the urgent situation in Tibet, the current world situation and the behavior of the PRC's leadership, we should be able to understand the views and aspiration of the common Tibetans on what would be the best course of future actions beneficial to the Tibetan cause," Prof Rinpoche said.

"Under such dire circumstances, Tibetans in Tibet pinned all their hopes on fellow Tibetans in the free world. It is needless for us to mention that, at such times, we cannot be insensitive to their cries; we must show solidarity with our brethrens and we must do whatever is in our means to improve their situation," Rinpoche said.

Rinpoche outlined that the main objectives of the meetings are to have open and frank discussions on the issues of Tibet by the general Tibetan masses at this critical point in time, to invite views and comments on the CTA's policies and strategies that being expressed in media and on forums, and to provide official platform to receive critical views and opinions regarding the CTA's policies.

While describing the meeting as being "timely and the need of the hour" and an important event in the history of the Tibetan movement, Rinpoche maintained that any stand decided for the future of the Tibet should have the clear mandate of the people, and expressed hope that the united efforts of the Tibetan people should be visible on the international stage.

Speaker of the Tibetan parliament-in-exile Karma Chophel, in his opening speech, said the special meeting was called by the Dalai Lama in light of the recent upheavals and sufferings of the Tibetan people in Tibet.

"So everybody will discuss Tibetan issue in light of the recent upheavals in Tibet and the sufferings of the Tibetan people there, and to suggest what best could be done in future," Chophel said.

Commenting on the Kashag's decision not to influence the course of meeting, Chophel said, "They don't want to influence the genuine feelings and opinions of the Tibetan people from being expressed during the meeting."

"Even His Holiness (the Dalai Lama) decided not to attend the meeting for the same reasons," Chophel added. "His Holiness wants the Tibetan representatives to engage in a free and frank discussions on all possible issues regarding the future actions over Tibet."

Chophel said the meeting was called on to hear from the Tibetan masses on how to deal with the situation in Tibet in the face of the Chinese government's failure to mitigate the sufferings of the Tibetan people inside Tibet. Chophel said instead of addressing the anguishes and resentments expressed by Tibetans in Tibet, China continues to unleash unprecedented crackdowns on Tibetan expressions.

When asked if the meetings would have any implications on the policy of the exiled government, the Tibetan speaker said it would depend on the Dalai Lama's consideration on the summary of the outcomes of the meeting.

He said the organising committee of the meeting has formed 15 sub-committees to oversee the discussions in the coming days would come up with written suggestions and opinions of the participants of the meeting.

Karma said those suggestions and views would then be discussed and analysed during a preliminary session on November 21, and on the final day of the meeting, on November 22, the suggestions would be reviewed and consolidated into a final summary to be submitted to the Dalai Lama for his considerations.

After that the Dalai Lama might redirect the next step depending on his observation based on the context and contents of the summary, Karma said.

"If His Holiness the Dalai Lama issues direction to discuss the matter in the parliament, it would be discussed in parliamentary session and accordingly, based on the subject matter, it could influence our government's policy," Karma told phayul.com.

Image: Prime minister of the Tibetan government-in-exile Samdhong Rinpoche during a press conference in Dharamsala on November 18, 2008, where Tibetans are hammering out a new strategy for their fight against Chinese rule in the region after the Dalai Lama called for fresh guidance from his followers.

Tibet: Resuming dialogue is the only option

Change will come from within China

The radicalisation of Tibetan youth

Revolt in Tibet: Implications for India

'Time to wake up to Chinese incursions'