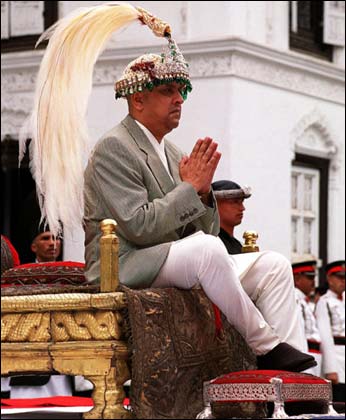 Nepal's embattled King Gyanedra on Tuesday spent his last day on the throne, closeted with his aides at the Narayanhiti palace in Kathmandu, anxiously awaiting his fate as the constituent assembly members were sworn in ahead of its crucial maiden session that will draw the curtains on the 240-year-old monarchy.

Rallies have been banned and the riot police have been deployed at all sensitive spots as a jittery government stepped up security following a series of bomb blasts in Kathmandu, including one near the venue of the assembly meeting, the Birendra International Convention Centre, ironically named after Gyanedra's slain elder brother.

Gyanendra has been asked to voluntarily vacate the Narayanhiti palace where his great grandfather King Prithvi Bir Bikram Shah shifted nearly 124 years ago. The 60-year monarch left for a weekend retreat at the Nagarjuna palace on the outskirts of the capital but returned on Monday evening, sources said.

The constituent assembly meeting on Wednesday will accomplish what the Maoists, who are set to rule the country after giving up their decade-long armed struggle in 2006, aspired for, the end of monarchy that was perhaps hastened by Gyanendra's power grab in 2005 that alienated the ruler from the people and political parties.

Gyanendra Bir Bikram Shah Dev ascended the throne of the world's only surviving Hindu monarchy in controversial circumstances in 2001 after his brother King Birendra and his family were killed in a massacre allegedly carried out by crown prince Dipendra at the royal palace.

Gyanedra's enthronement had intensified the three-way power struggle among Nepal's political parties, a violent Maoist movement and the King himself, which finally culminated in the sacking of the elected Sher Bahadur Deuba government in October 2002. A year later Gyanendra declared a state of emergency and sent troops after the rebels when peace talks collapsed.

Gyanendra appointed a series of prime ministers -- Lokendra Bahadur Chand, Surya Bahadur Thapa and Deuba -- who was sacked again in February 2005 after which the monarch assumed absolute powers, drawing international condemnation. The King's ostensible reason for the royal coup, the first since Nepal had an elected prime minister in 1991, was that the government had failed to check the Maoists led by Prachanda who was virtually running a parallel government in the country's rural areas.

Gyanendra insisted that he was still committed to democracy and multi-party rule and repeatedly pledged to hold general elections by 2007. Local elections, opposed by the rebels and parties, took place in February 2006. The King, traditionally believed by Nepalese to be a reincarnation of Hindu deities, however, became increasingly unpopular following a crackdown on the political parties, the media and the Maoists. In April 2006, the major political parties unitedly launched massive street protests against the King forcing him to reinstate the previous parliament.

The seven-party alliance signed a landmark peace deal with the Maoists in November 2006 after which the rebels gave up their armed struggle and joined a unity government. The interim parliament stripped Gyanendra of all his powers in June last year and announced the nationalisation of royal property, removed the monarch's face from its currency and ended his mandatory presence at major national and religious functions.

India slams Pak for raking up Kashmir issue at UN

Nepal: Maoist chief to persuade King to step down peacefully