Blasts in courts: The usual suspects 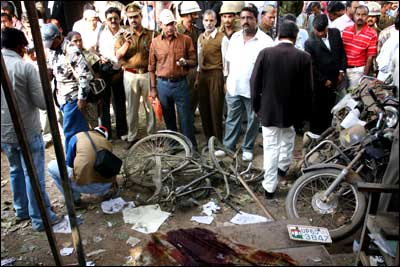 Uttar Pradesh was struck once again in the form of three blasts, which took place in the cities of Varanasi, Faizabad and state capital Lucknow, including a court premises in December 2007.

The 23 terror modules in Uttar Pradesh

As usual the suspect was HuJI again. However, a new organisation called the Indian Mujahideen claimed responsibility thus trying to divert the investigators. However, investigations revealed that it was the HuJI, which had carried out this attack in retaliation to the cases that were being tried against their men in the courts of the state.

The UP police claim they have solved this case with the arrest of two Kashmir-based terrorists. Although two prime suspects have been arrested, the police are still trying to find more clues on the involvement of SIMI in this case.

The IB says UP is a hub for the SIMI, which is setting up sleeper cells in order to provide logistic support to terror outfits.