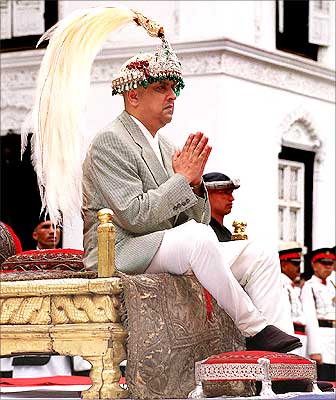 Nepal's last King on Wednesday bid farewell to the throne, held by the Shah dynasty for 240 years, with an emotion-charged speech in which he said he 'respected' the Constituent Assembly's decision to abolish monarchy and denied that he was leaving the country.

The 60-year-old Gyanendra said he respected the will of the people and wanted to contribute in 'whatever capacity' he can to promote peace in the country.

"I have assisted in and respected the verdict of the people," he said in his first comments since the declaration of the country a republic on May 28, but added that he 'will not leave this country' and go into exile.

Gyanendra said he had already handed over his crown and sceptre to the government.

"The crown and sceptre used by the Shah dynasty, I have given to the Nepal government," he said.

In his 14-minute speech, the former king clarified that he and his family members were not in anyway involved in the royal massacre in 2001.

"Me and my family have been continuously defamed with ill intentions which was saddening and still is. The accusations that were targeted against us were inhuman."

Gyanendra ascended to the throne after King Birendra and his family were killed in the June 2001 massacre allegedly carried out by Crown Prince Dipendra at the royal palace.

"In 2001, I did not even get to mourn the deaths of my brother and sister-in-law and my nephews and nieces," he said.

Gyanendra, who moves to Nagarjuna palace, located seven km west of the capital, said he recognised the Constituent Assembly polls held on April 10 and decisions taken by it on May 28, including declaration of Nepal as a republic.

Gyanendra said he will cooperate with the government in 'every way' for the successful implementation of the Constituent Assembly's decisions.

"There was also an accusation that I have lots of property and money abroad. All my properties are in Nepal. All the properties I have are nationalised. In the last seven years, I have not gathered any money or property," he said.

In his speech, Gyanendra, stopped short of apologising to those killed during his reign but said, "If any people have been harmed, I hope you understand it was unintentional."

The last Hindu King of the world lost his crown last month after a Constituent Assembly voted to formally end the institution of monarchy, turning him into an ordinary citizen.

Home Minister Krishna Sitaula said the government will not provide any allowance or cultural power to the former monarch and clarified that the Nagarjun forest bungalow has been provided to Gyanendra for temporary purpose only.

Over 1,000 journalists attended the address by the deposed king at the palace on Wednesday.

The end of Nepal's monarchy is a key part of the 2006 peace deal reached between Nepal's former rebel Maoists and mainstream parties.