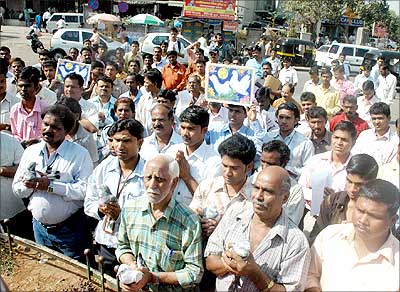 The residents of Sahar Village along with the members of Mitra Mandal, a non-governmental organisation, staged a protest against the recent terror strike on Mumbai at the Chhattrapati Shivaji International Airport in the city on Monday.

The protestors urged the airport authorities to ban all aircraft of the Pakistan International Airlines from taking off or landing at the airport. It also urged airport workers to refuse to undertake any work such as loading, unloading, ground handling and catering of PIA flights.

The protestors carried pigeons and posters of the Indian tricolour during the demonstration. They also chanted slogans against Pakistan and President Asif Ali Zardari.