The young drug addicts of Varanasi 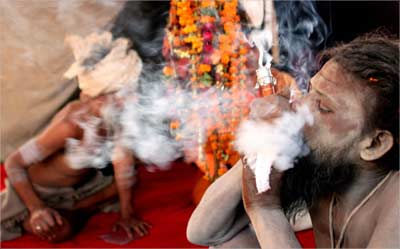 It's a blot on a city once known for its famous Banarasi sarees, paan and temples.

Over 12,000 children in the age group of 6-13 years, mostly from poor families living near Ganga Ghats, in Varanasi are tobacco and drug addicts, a survey has said.

Even a large number of girls are using such intoxicants.

According to the survey, children from a rich background are also addicted to intoxicants.

Image:  Sadhus smoke charas in their shelter at Ganga Ghats.

Bihar Oppn ready to embrace Nitish if he ditches BJP