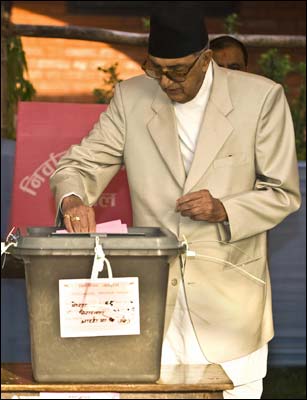 Nepal voted on Thursday in a landmark constituent assembly election that will decide the fate of the centuries-old monarchy and the future political system of the Himalayan nation.

Altogether 55 political parties are participating in the crucial polls in which some 17.6 million people are eligible to vote.

The country has witnessed a violence-marred campaign for the crucial elections to elect a body that will rewrite the Constitution and decide the fate of the 239-year-old monarchy.

The vote is a key step towards culmination of the peace process that started with the signing of a November 2006 deal following which the Maoist rebels ended their decade-long insurgency and joined the political mainstream.

The common agenda of the ruling Seven Party Alliance for the election is to abolish monarchy and establish a federal democratic republic.

Shirish B Pradhan in Kathmandu
Source: PTI© Copyright 2023 PTI. All rights reserved. Republication or redistribution of PTI content, including by framing or similar means, is expressly prohibited without the prior written consent.
Print this article