'Literary critics will never grow up'

By Lindsay Pereira
September 12, 2007 11:46 IST
Hari Mohan Nath Kunzru has never had a problem speaking his mind. A great many people found that out on November 20, 2003, when his debut novel, The Impressionist, won the £5,000 John Llewellyn Rhys award. As guests at the award ceremony waited for Kunzru to show, his agent walked to the podium instead, to read a statement issued by the author.

Kunzru rejected the award, claiming the Daily Mail and the Mail on Sunday -- tabloid newspapers that sponsor the prize -- both pursued an 'editorial policy of vilifying and demonising refugees and asylum-seekers.'

The last time a similar occurrence had taken place was 31 years ago, when John Berger won the Booker for his novel, G. While accepting the prize, he criticised the sponsor too -- in that case, food wholesaling company Booker McConnell -- for its trading interests in the West Indies, then announced he would donate half his cash award to the Black Panther Party in Britain, as part of his 'political struggle'.

Kunzru must have known he would get more than a few people hot under their collars, but persisted nonetheless. This refreshing candour, backed by genuine talent -- The Impressionist won him the Betty Trask Prize and Somerset Maugham Award, apart from making it to the short-lists of the Guardian First Book Award, Whitbread First Novel Award and British Book Awards Author of the Year award -- got him on the list of the celebrated literary magazine Granta's 20 'Best of Young British Novelists'.

Of mixed English and Kashmiri Pandit ancestry, Kunzru grew up in Essex and got into writing the old-fashioned way -- via a degree in English from Oxford. He followed this with a master's in philosophy and literature, before kick-starting his career with short stories in magazines. He followed up the success of The Impressionist -- which got much attention in India for the alleged huge advance it got the author -- with Transmission (2004), and a short story collection titled Noise, a year later.

Given his history, Kunzru is more than equipped to write My Revolutions, his latest novel that is ostensibly set in the past, but has much to say about the unstable times we live in. Documenting the life of student Chris Carver of the London School of Economics, he creates a fable many born in the sixties will easily come to grips with.

His head awash in political idealism, Carver does it all -- protests, communal living, marches, sit-ins, clashes with police, bombing, robbery, even terrorism -- in his attempts to take on the State. Through events real and imagined, Kunzru creates a second life for Carver that, on the eve of his fiftieth birthday, threatens to come apart at the seams when someone from his colourful past decides to pay him a visit. 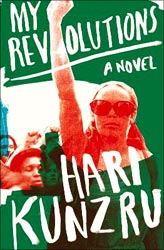 What's a day in the life of a successful young British novelist usually like?

Novelists stay in a lot; it's part of the job description. Much of my day is spent staring out the window (I have a very typical London view of nineteenth-century town houses and little gardens) and tidying my desk. In between, there are bouts of frenzied typing.

In an interview a few years ago, you talked of how it is things like television show The Kumars at No 42 that will do more to promote harmony than any amount of government speeches by Tony Blair. Are things any different now, from the time you said that?

Britain is in a very strange mental space at the moment. There's a lot of talk about social breakdown, and irreconcilable differences between races and classes. There's also a great deal of apocalyptic talk about everything from teenage alcoholism to the weather. However, most people seem perfectly happy as long as they're shopping. In the midst of this, British Asians continue to do well -- and persuade the rest of the country to adopt Indian styles and habits. The latest star, for instance, is a television chef called Anjum Anand.

Issues of race tend to form the subtext of a fair amount of your writing. How much of that do you attribute to growing up in England?

It's hard for Indians to understand how fraught and complicated the history of Britain makes this subject -- race has all the complexities (and absurdities) of caste. It's a perennial topic. In Britain these days, Indians and Pakistanis are a familiar part of the cultural landscape. There are many prominent Asian figures. There are newer immigrant groups who find themselves at the bottom of the pile -- Somalis, Eastern Europeans and sub-Saharan Africans.

Transmission had insightful comments to make about the Internet and far-reaching implications it can have for those who surf it. Considering it grants an author intimate access to an audience, how do you spend most of your time online?

I am often researching, so I end up in some strange places. But I do what most people do -- I follow a few mailing lists, watch weird videos on YouTube. I am currently dipping my toe into the world of social networking sites. I'm not sure I like the idea that 'friendship' is a commodity.

The journey of Pran Nath -- protagonist of The Impressionist -- was almost overshadowed by the attention your advance got instead. Have literary critics grown up since then?

Literary critics will never grow up. Luckily for me, these days, people seem to be more interested in talking about my work than about money.

What are your views on the major literary awards of our time, like the Man Booker, that tend to play god with the careers of many Commonwealth writers?

I think if you're given an award, it appears to be the most logical, wise and definitive assessment of your cultural importance. If you're not given one, then awards are illogical, arbitrary and frivolous. Essentially they are useful marketing tools, but the assessment of literary value is a much longer-term process. I think we are just beginning to discern the important books of the seventies.

Do you still stand by your decision to turn down the John Llewellyn Rhys prize?

Absolutely. I was protesting against the sponsor -- and what I've seen since then of the Mail group's journalistic practises has just confirmed my poor opinion of the paper.

You were recently in India for a literary festival. What draws you to such events?

I like to meet other writers -- it's rare to get a chance to 'talk shop' -- and I have had some memorable dinners with important writers like J M Coetzee, Daniel Dennett, John Banville and Harold Pinter. Festivals also remind the writer of the existence of serious readers, people who are committed and passionate about books.

Why should readers in India pick up copies of My Revolutions?

It doesn't have an 'Indian' theme, as such, but the story of a young man who becomes a political radical in 70s London has relevance to the Indian political experience -- and (I think) it's a good story. What more can I say?