It's snowing in Himachal 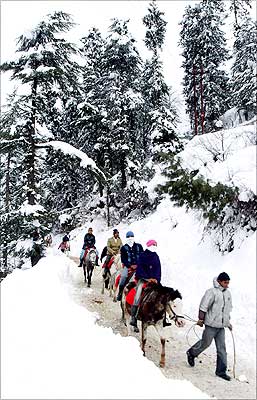 Snow and rain lashed Himachal Pradesh on Friday, resulting in a sharp fall in temperature.

Bright sunshine greeted people of the hill resort on Friday morning, but just as it looked like cold conditions had eased, the weather changed by afternoon with rain and snow pounding Shimla and other parts of the state.

About 3 cm of snow was recorded in Shimla, Met office sources said.

Snowfall was also reported from Kalpa, Kufri, Manali and high-altitude areas of Lahual and Spiti.

Rain occurred in many places in the plains. The sudden change of weather led to a sharp fall in temperature.

The maximum temperature which read 8.2° C in the state capital on Friday afternoon plummetted to 3° C by the evening, the Met office said.

Met office Director Manmohan Singh attributed the sudden change in weather to the convective activity of clouds. He, however, said it was due to local factors and would not last long.

3 soldiers killed as fidayeen return to JK after 3 yrs