The resignation of Union Minister M H Ambareesh from the Lok Sabha on Wednesday was not accepted by Speaker Somnath Chatterjee as it was "not in an acceptable form."

The Speaker's office said that it did receive a fax from the Union Minister, but it was not in an acceptable form.

The Kannada actor-turned-politician resigned as Union minister of state for Information and Broadcasting as also from the Lok Sabha in protest against Cauvery Water Disputes Tribunal award.

The speaker's office, however, said that Chatterjee has accepted the resignation of Shiv Sena member of Parliament Subodh Mohite who resigned from the Ramtek seat.

Chatterjee followed due procedure while accepting Mohite's resignation as the Sena MP met him during the day and signed the resignation letter for the second time in front of him. 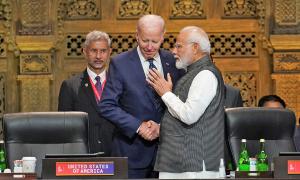 In narco test too, Aaftab admits to killing Shraddha