Next step for Modi -- the national stage

No other leader in the history of Gujarat state has captured the public imagination as Chief Minister Narendra Modi has.

Dr Jivraj Mehta, the state's first chief minister, was a man of immense intellect and vision. Yet he vanished into obscurity. The Late Chimanbhai Patel, the man Modi should thank for the Narmada waters in the taps and canals and the vibrant state of the present Gujarat economy, is only remembered for corruption during his tenure.

Modi's public face is a larger than life projection of an image, that public loves to accept as the real thing.

It had always been Modi's forte to plan electoral strategies and he was a brilliant backroom boy. But no backroom boy ever rides the waves. However, Godhra put him right in the national limelight and he lost no time in projecting himself as a Hindutva hero. The secular media held him responsible for everything the Muslim society suffered from.

While it is apparent that Modi has gone ahead, it is far from clear if the Hindu cause too has advanced in the same way. Similarly it is clear that the secular flag has raised the stature of some activists/NGOs while the Muslim masses continue to suffer the same disabilities as before.

Modi also has the foresight to mobilise the Hindu sense of victimisation from the time he was inducted into the BJP in 1987 as its state general secretary. Before 1987, the BJP never bothered to photograph Hindu victims of communal riots. Modi always ensured that pictures of Hindu victims were distributed to the media. While other leaders worked on caste combinations, Modi saw the formidable power of the Hindu vote-bank.

Making Keshubhai Patel chief minister was his first shot at exercising political power through a proxy, a hyperactive remote firmly in hand. In the process, he initiated the first full-scale fratricidal civil war within the BJP with Sankersinh Vaghela leading the other side. Vaghela turned the tables on Modi. And in an A B Vajpayee-brokered compromise Suresh Mehta became the chief minister while Modi was banished to New Delhi.

This punishment proved to be a blessing in disguise. It enabled Modi to grasp the power of the media, a rarity among Rashtriya Swayawsevak Sangh pracharaks. It was around this time that he developed a telegenic personality and made frequent appearances on TV channels on behalf of the BJP.

It was this transformed Modi who replaced Keshubhai as chief minister in 2001. The local media had no interest in giving him publicity whether it was his navratri fasts or major policy declarations. Also there was no way he looked like bucking the trend and bringing BJP back to power in 2002. He looked like no improvement on Keshubhai.

Then Godhra and the Gujarat riots happened. The violence created so many political whirlpools that the opposition Congress got sucked in never to fully recover; even Modi's enemies inside the party were rendered defenceless.

Since then Modi has never looked back. He is so sure of the force harnessed by him that he has already developed prime-ministerial airs, setting off panic buttons in the BJP high command. Such is the antipathy towards him that they will do anything to stop Modi.

But can they? He has proved to be a formidable vote-catcher at a time when the BJP leadership is full of political bureaucrats without mass following. The survival of the party demands that these bureaucrats make way for Modi or else they and the party will perish. Surrendering to Modi is their last chance for long term survival.

Arvind Bosmia is an Ahmedabad based freelance journalist. 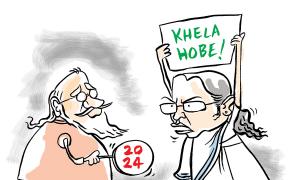 Coverage: The Battle for Gujarat