Mohammad Afzal, the Jaish-e-Mohammed militant sentenced to death for plotting the attack on Parliament in 2001, on Monday withdrew his petition in which he had sought an end to his solitary confinement in Tihar Jail.

Afzal had last month moved an application before Additional Sessions Judge Ravinder Kaur seeking his transfer from the solitary ward in Tihar Jail to a general ward.

He had contended that his continuous solitary imprisonment was leading to 'mental complications.'

The court had issued Afzal's death warrant on September 26, last year and he had been lodged in solitary confinement since then as per jail manuals.

However, Afzal's execution was stayed after he moved a clemency petition before the President. Afzal's death sentence, pronounced by the trial court on December 18, 2002, was confirmed by the Delhi High Court and upheld by the Supreme Court. 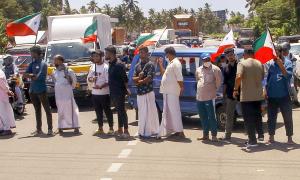 PFI had ties with radical Turkey group linked to Qaeda

Law of land will be supreme in Afzal case: Kalam