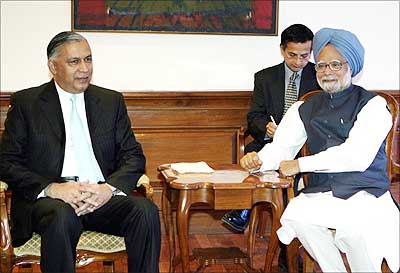 Prime Minister Manmohan Singh had a meeting on Wednesday with his Pakistani counterpart Shaukat Aziz.

The Pakistan premier is in New Delhi to attend the two-day 14th SAARC Summit, which began on Tuesday.

Noting that the ongoing dialogue process has created a 'good atmosphere', Pakistan said it was making every effort to make it a success and hoped tangible results will be achieved on Kashmir and other issues.

Aziz said he had shared these views with Dr Singh during their 50-minute meeting, which also covered Siachen, Sir Creek, Iran-Pakistan-India gas pipeline and connectivity issues.

The cross-border Samjhauta Express blasts, that killed 68 Indians and Pakistanis in February, also came up for discussion and Dr Singh assured his counterpart that the progress in investigations will be shared periodically with Islamabad, Aziz told reporters.

On Kashmir, Aziz said dialogue was progressing at various levels to address the issue.

"The ongoing dialogue process has created a good atmosphere and will lead to better ties," he said after his meeting with Dr Singh.

Replying to questions, the Pakistan prime minister said the dialogue with India on Kashmir and other issues was going on well.

The dialogue, designed to improve relations, is going on at various levels, Aziz said hoping it will lead to a 'tangible conclusion'.

He referred to the Defence Secretary-level talks to be held in Islamabad on April 6 and expressed confidence that there will be 'substantive' progress on Siachen and Sir Creek.

As part of enhancing people-to-people contacts and trade relations, Dr Singh and Aziz agreed to increase air links and grant permission to the banks of the respective countries to open branches.

During the meeting, Aziz raised the issue of Samjhauta Express blasts, underscoring Pakistan's interest in the probe findings.

Aziz said Dr Singh assured him that the Pakistani side would be kept informed and provided details from time to time. Dr Singh expressed deep sorrow over the loss of lives in the blasts that killed 68 people, most of them Pakistanis, travelling from Delhi to Lahore.

The Pakistani leader used the occasion to thank the Indian government for the financial support given to the families of the victims of the Samjhauta terror blasts.

The issue of prisoners also came up for discussion, with both leaders agreeing that status of each of them would be looked into. At least 390 Indian fishermen and 149 other civilians are imprisoned in various Pakistani jails and New Delhi has been pressing Islamabad to ensure humane treatment to them in the wake of reports of ill-treatment meted out to them.