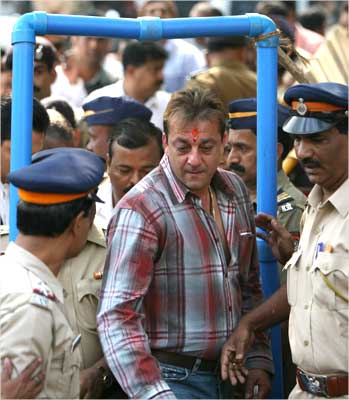 Actor Sanjay Dutt and accused in the 1993 Mumbai Blasts case arrives at a TADA court on Tuesday morning.

The court found Dutt guilty under the Arms Act, it acquitted the actor of the criminal conspiracy charges under TADA.

The minimum sentence for the charges under which Dutt has been found guilty is five years.

Dutt is charged with receiving three AK-56 rifles, its ammunition, a 9 mm pistol, cartridges and hand grenades, which were part of the consignment smuggled by Tiger Memon to set off a series of blasts in Mumbai on March 12, 1993.