Dewani was killed in the Mumbai suburb of Oshiwara in June 2001 and Salem had confessed in an earlier statement in February 2006 that he was involved in this murder.

NDTV, however, did not quote any police official on record but the revelation by Salem brings a new twist to the murder case of Dewani.

Earlier, the police had believed that Dewani was killed because Koirala had refused to pay the extortion money to Salem and, therefore, he targeted her secretary.

According to the channel, when narco analysis, brain mapping and lie detection tests were conducted on Salem in December, he reportedly told investigators that Koirala was involved in the murder of Dewani.

The report further claimed that Koirala had a rift with Dewani over monetary issues and therefore she took this extreme step.

The actress however was not available for comment and is reportedly in Australia on a shooting schedule. If the report is said to be true, then Koirala could be called for questioning by the police once she comes back to Mumbai.

Eleven witnesses have, so far, deposed in court in Dewani murder case after the alleged conduit Shah Alam, a henchman of Abu Salem, was arrested last month.

Gangster Abu Salem ruled the Indian Hindi film industry by terror from 1997 till 2001, allegedly threatening all actors and actresses in the industry. He is reportedly involved in the murder of music baron Gulshan Kumar and his henchmen also attacked producer-director Rakesh Roshan when he refused to pay extortion money.

A correspondent in Mumbai
Print this article 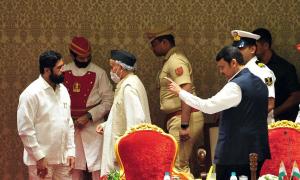