Taking the wind out of the Opposition's sails, Congress president Sonia Gandhi today announced her resignation from the Lok Sabha and as chairperson of the National Advisory Council, an office that threatened to cost her seat in Parliament. 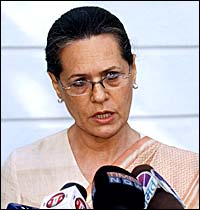 Prime Minister Manmohan Singh has accepted Sonia resignation from the post of Chairperson of the National Advisory Council.

Shortly after making this announcement, Gandhi drove to Lok Sabha speaker Somnath Chatterjee's residence and submitted her resignation. Chatterjee has accepted it with immediate effect.

As the Bharatiya Janata Party-led National Democratic Alliance and Samajwadi Party mounted a major political campaign against Gandhi, the 59-year-old MP sprang a surprise that could take away the sting from the Opposition's attack that the government's move for an Ordinance to redefine office of profit was aimed at saving her from 'a certain disqualification' as MP.

The resignation came on day the BJP petitioned President A P J Abdul Kalam seeking her disqualification from the Lok Sabha on the ground she held an office of profit as chairperson of the NAC. The Telugu Desam Party had already petitioned the President last week in this regard.

Significantly, Chief Election Commissioner B B Tandon said today that the law was the same for everybody and he would consider the petition against Gandhi when it was referred by the President.

In a statement to announce her resignation, Sonia Gandhi said, 'In the last few days some Opposition parties are trying to create an impression that the Congress and the United Progressive Alliance are using Parliament and the government only to protect me. This has hurt me very much.'

'I have stated earlier also that I am in politics and public life not for my selfish ends,' she said. 'I have taken a pledge to serve the people of the country and to protect secular ideals. So, in keeping with my public life and political principles and according to my own belief, I resign as member of the Lok Sabha and chairperson of National Advisory Council. I have full faith that brothers and sisters of Rae Bareilly and the whole nation will understand this feeling of mine.'

Gandhi came out with the brief statement after consultations with top leaders including Prime Minister Manmohan Singh.

She said she would contest again from the same constituency.

With overnight indications that the government was keen on bringing an Ordinance after getting the Parliament
adjourned sine die, the Union Cabinet met today but the issue did not come up, apparently because of Gandhi's reservations over including NAC in the list of office of profit sought to be exempted.

While the Congressmen were keen that the NAC should be also covered by the amendment to the Members of Parliament (Prevention of Disqualification) Act, Sonia was firm that she should not be seen as being benefited by any legal device.

"I have done this because this is the right thing to do," Gandhi told reporters .

This is her second act of giving up a politically important position, the first being her refusal to take up the prime
ministership soon after the Congress-led UPA was voted to power in May 2004.

With Gandhi's resignation, interest will now centre around the strategy to be adopted by similarly-placed persons.

The Speaker had even kept away from the House yesterday, saying he did it as a matter of propriety after some members had raked up issues against him.

Today the SP turned down his offer to resign and attacked the Centre over the Ordinance issue.

In all about 62 MPs are said to be in various posts, most of them from the Left in West Bengal, which Trinamul Congress leader Mamta Banerjee has sought to exploit politically ahead of the assembly polls in the state. 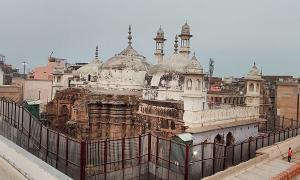