Wounded, but an escape from death

By Ronjita Kulkarni in Mumbai
July 12, 2006 20:45 IST
Ramkrishna Mhatre lay in a crowded ward at Mumbai's KEM hospital, surrounded by his family.

He has tubes going in and out of his body, but he is conscious. And very hungry. But he has been advised not to eat by the doctors.

"He has not eaten since last evening," his wife Nirmala said. "He is not allowed to drink water either."

Mhatre, 50, is getting his nutrition from the tubes, but he feels giddy constantly.

His wife explains that both his eardrums ruptured because of the blast, and he has lost a sense of balance. Mhatre feebly shows the left side of his head.

After the blast, debris got lodged in Mhatre's head and ears. His arms are also pockmarked by debris. While the doctors removed particles of debris from his head and ears, the debris particles on his arms are too small and too many to remove. His wife says they will come out on their own later.

Mhatre, who works as a carpenter in the Railways, was injured in the blast at the Matunga station. He was on his way home from his workplace at Mahalaxmi.

"Since I work with the Railways, I get a first-class pass to Mira Road where I stay," he explains.

He was standing at the door of the compartment, and hence spared a worse fate.

After the explosion, Mhatre found blood all over his head and shirt. At first, he thought it belonged to someone else. Later, he realised that his head was bleeding profusely.

"I was feeling numb and dazed," he recalled.

People, who had gathered outside the train, rushed forward to help the passengers.

"One person asked me for my name and mobile number, and I gave it to him. He later flashed it on television. That is how my wife and family came to know that I was injured," he said.

"I was very upset yesterday," Nirmala said. "Usually, my two college-going daughters take the same train as their father. Thankfully, yesterday, they missed the train. Since all three were out of the house, I was alone at home, with no news of my family. I could not stop crying. At 11 pm, I read the flash on television and rushed to KEM."

Since then, Nirmala has been by her husband's side.

Nirmala is grateful to the social workers and doctors at KEM. "We have been given free food and water. People also come from time to time inquiring about us," she says.

"I have had only two hours of sleep since last evening," Dr Deshpande, a senior doctor, said. "The junior staff has not even got that. The two restaurants near the hospital have been open all night, supplying us with food."

Dr Deshpande is treating three critical patients in the Intensive Care Unit, and he can't help but worry for them. "Two of them will get well. But the third one has suffered brain damage. One cannot say when he will get well."

In contrast, the doctors at Sion Hospital appeared a bit more relaxed.

The relatives of the victims, on the hand, looked just as distraught.

Vijay Motwani's brother-in-law is relieved that Vijay -- a manager at indiainfoline.com -- is recovering steadily.

Vijay, 35, was injured in the blast at Mahim. He was travelling with his 30-year-old wife, who was in the ladies' first class compartment.

"Vijay was inside the compartment when the blast ripped it apart. There was a man standing just in front of him, who was killed. That man was like a shield for Vijay. Vijay was only hurt near his eyes, because that man came up to Vijay's chin. If he had been taller, Vijay would have been unscathed," his brother-in-law said.

Vijay was chatting with his wife on his cell phone when the blast occurred. After the explosion, Vijay managed to get out of the compartment, walking over bodies strewn everywhere. He kept calling out to his wife, hoping she was safe. By the time his wife got out of her compartment, Vijay was down on the tracks, with blood streaming out of his head.

At home, Vijay's nine-year-old and one-year-old children don't realise how close to death their father was.

Ronjita Kulkarni in Mumbai
SHARE THIS STORY
Print this article 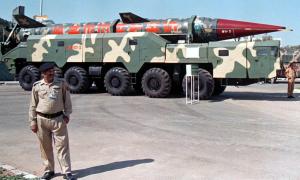