Here was the Bihar chief minister, attending the annual conclave of non resident Indians and persons of Indian origin for the first time, trying to impress and convince them that Bihar is not a bad destination for investment after all. 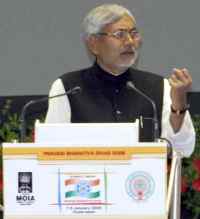 Nitish, who addressed the gathering in Hindi, said the transformation of Bihar began since the recent political change after the state assembly elections last year.

"I am here because the winds of political change have transformed governance and life in Bihar. I am here taking the dreams of millions of Biharis," the chief minister said to the constant applause of the audience.

Nitish is leading a high level delegation of state ministers and officials, including Deputy Chief Minister Sushil Kumar Modi for the PBD. The Bihar delegation held a parallel session with non-resident Indians of Bihari origin to showcase them the vast investment opportunities that Bihar offered these days.

Lalu has little hope from meet

Asking NRIs and PIOs to come and partake in the development and progress that he is charting out, he said that a 900 km national highway was already being built through Bihar.

Nitish said his immediate priorities were rural development sectors like healthcare, education and water and sanitation.

"We are launching new programmes and policies better the lives of the people. We need your help in executing more people-friendly programmes," he said.

"All these years, Bihar had a bad reputation of being at the bottom of Indian states in matters such as law and order, development and per capita income, and annual GDP growth rate. Our utmost priority now is to take our status from the bottom to the top. Overseas Indians can help achieve this goal in one way or the other," he added.

Bihar to tap into its NRI base

The chief minister said he had come to invite all the NRIs gathered for the PBD in Hyderabad to Bihar.

"Come to Bihar. Bihar is waiting for you," he said.

Pointing out that Biharis were working across the country and across the world, from top position to the lowest workers, he said, "Biharis are the most hard-working people in India. They are ready to work hard and die. We have the human resources. We want to channelise our resources in the best possible manner now."