'There is another Gujarat waiting to happen' 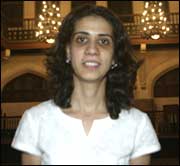 The 2002 Gujarat riots were more political than communal.

There is another Gujarat waiting to happen in Madhya Pradesh and Orissa.

Even now, Muslims can't get a ration card in parts of Gujarat.

The current situation in Gujarat is no different from what it was during the riots -- minus the violence and the deaths.

This is the picture of Gujarat that some human rights activists painted on Wednesday evening at Wilson College, Mumbai, during the launch of a book on the pogrom of 2002 -- Scarred: Experiments with Violence in Gujarat.

The book, written by journalist Dionne Bunsha, looks into what it calls 'the story of a disaster in the Hindutva laboratory that etched deep faults in Gujarat's social landscape'.

"The riots were more political than communal. There was an election coming up at that time, and communal hatred was the way Narendra Modi picked to win the elections," Bunsha said after the launch.

About her experiences while working on the book, she said, "There are people who brag that they have kidnapped up to 400 Hindu girls who dared to marry boys from other religions. They talk with much machismo and bravado about how they beat up the boys and grabbed the women.

"Why does the political mafia have the kind of grip that it does? Why do the police, who swing into action after terrorist attacks, do nothing about the culprits in the riots who are roaming free?

"The middle class in Gujarat is happy to get on with life. The opposition party -- the Congress -- is weak," she said.

The riots cannot be dismissed as a thing of past, warned human rights lawyer Mihir Desai.

"Communal hatred is spreading. I have traveled across Madhya Pradesh and Orissa [ruled by the Bharatiya Janata Party and its ally] in the past two years. The situation in many of the districts is exactly how it was in Gujarat just before the riots."

There is no guarantee that it won't happen again, Desai said.

According to Haseena Sheikh, a community worker and a refugee from Pavagadh village, even in Gujarat things haven't changed much. "I still cannot go back to my village. The fear is still there," she said.

She said even something as basic as getting a ration card is not possible. "They cite some reason or the other and deny us a card," she said.

If that is scary, consider this:

In Dang, a district collector, who has allegedly spent about Rs 1 crore in helping a a body affiliated to the Rashtriya Swayamsevak Sangh, will organise a Hindukaran (proselytisation) mela, which will 'show the way for the tribal people of India'.

This, activist Rohit Prajapati said, is the atmosphere in Dang, a small district of 1,86,000 people, where the RSS is planning a Shabri Kumbh on February 11.

"If you remove the word violence and the number of people killed in 2002, nothing has changed in Gujarat between then and now. People are terrorised. Social justice is sabotaged," Prajapati said.

The district collector of Dang, which is also a reserve forest, reportedly told the activists that nothing untoward will happen during the mela. "When we asked what he meant by that, he laughed and said, 'there are chances of a conflict after that.'"

Tanvir Jafri, son of member of Parliament Ahsan Jafri who was killed in the 2002 riots, said Muslims need to channel their energies in the right direction to survive in such conditions.

"The social and economic status of Muslims is going down. Most of our money goes into madrassas and mosques. We are not generating competent people. It is high time Muslims looked into where the money goes," he said.

Stressing that even today Muslims are traumatised, Jafri said, "The violence won't end."

He added: "Our prime minister apologised for the 1984 anti-Sikh riots and sanctioned huge compensation for the survivors. Maybe 20 years later, somebody will come up and apologise for the victims of Gujarat."

Krishnakumar in Mumbai
Print this article