How Pakistan surrendered in 1971

December 20, 2006 07:20 IST
In the second part of his conversation with Deputy Managing Editor Ramananda Sengupta, Lieutenant General J F R Jacob, Chief of Staff, Eastern Army Command during the 1971 war, reveals how, armed with only a draft surrender document and an aide, he made the Pakistani army led by Lieutenant General A A K Niazi surrender.

Part I of the Interview: 'I had to find the troops for Dhaka'

Though no war goes completely according to plan, this one went off reasonably well, and on December 13, we were outside Dhaka.

The advance from the north went off well, and though the move of the two brigades was delayed the paradrop took place as planned. By December 13, we had about 3,000 troops outside Dhaka.

Meanwhile the American fleet was moving into the Straits of Malacca. Some in Delhi were panicking. The radio signals we were intercepting from Islamabad to the Pakistani forces in the east said "Fight on, you are getting help from yellow (China) from the north, and white (America) from the south."

On December 13, there was an American resolution at the United Nations, which was vetoed by the Soviet Union. The Soviets said no more vetos. (Then Chief of the Army Staff S H F J) Manekshaw reacted and sent us an order to capture "all the towns in Bangladesh except Dacca." Listing every single one that we had bypassed.

We were outside Dhaka, still no mention was made to capture Dhaka!

Not only that, he copied the order down to the three corps. So we rang the corps to tell them to ignore these orders.

(Lieutenant General Jagjit Singh) Aurora (then General Officer Commanding Eastern Command) came agitated into my room, showing me the signal and saying this was was all my fault because he wanted to capture the towns, and I did not support this view. Further, I had opposed operations to capture Sylhet, Rangpur and Dinajpur and other towns in East Pakistan.

So I got hold of Niazi on the wireless that night and explained that our forces outside Dhaka were very strong, a Mukti Bahini uprising was imminent, ethnic minorities would be protected and that they ( the Pakistan army) would be treated with dignity if they surrendered.

On December 14, I got an intercept that there was a meeting at the Government House in Dhaka. There were two government houses in Dhaka, so we took an educated guess, and fortunately it was the correct one. The Indian Air Force bombed it within two hours. The governor of East Pakistan resigned.

About 4 pm that afternoon, Niazi and Major General Farman Ali went to see Spivack, the American consul general, with the following proposals:

I got to know about it through one of the embassies. So I informed Manekshaw, who spoke to the American ambassador in India, who didn't know anything about it. That same day, the American embassy in Islamabad sent it to New York, and it was given on December 15 to (then Pakistan foreign minister) Zulfiqar Ali Bhutto. He refused to accept it. The Americans then gave it to us.

On December 15, the ceasefire was ordered.

A resolution by Poland, part of the Soviet bloc, was introduced at the UN on December 15 evening in New York, which was the morning of December 16 our time. Bhutto tore it up in rage, because it did not condemn India as an aggressor.

On the morning of December 16, Manekshaw phoned me and said: "Go and get a surrender."

"On what terms?" I asked. "I have already send you a draft surrender document. Do I negotiate on that?"

Then I made a mistake. I told him that when I was talking to Niazi, he had invited me for lunch, and I forgot about it. On the staircase, I met Mrs Aurora, and she told she was going to Dhaka with her husband. "My place is beside my husband," she said.

I was changing helicopters at Jessore to get to Dhaka, when a man came running to me with a signal from Army HQ. I opened it, thinking good, now I have some orders.

I was unarmed, and carrying the document which I had typed and sent to Delhi. A staff officer was with me, that's all. I opened the letter, and it said: "The government of India has approved of General Jacob having lunch with Niazi." Who wanted their permission?

Anyway, I landed at Dhaka still carrying this paper which I had sent to Delhi. On my arrival, I was met by the UN representatives who said we are coming with you to arrange the withdrawal of the Pakistani army and the takeover of the government.

I said thank you very much, I don't need your help.

Fighting was going all around Dhaka between the Pakistani troops and the Mukti Bahini. A Pakistani brigadier met me at the airfield to guide me to Niazi.

En route, We were stopped by a unit of the Mukti Bahini, who refused to let us proceed. We are going to attack Niazi's headuarters, they said. "He is surrendering, please let me go," I said. The Time magazine reporter who was there said I threatened to shoot them. I said no such thing. I didn't have a weapon to shoot them with!

A long argument took place with the Mukti Bahini, until I said, "Look, your new government is coming in tomorrow, and Niazi wants to surrender, for God's sake let us go!" Finally they let us go. I arrived at Niazi's headquarters, where I had the draft surrender document read out to him.

This is an unconditional surrender, he said. "You have only come here to discuss the ceasefire and the withdrawal of the Pakistani army."

"General," I replied, "this is not unconditional, I have worked on this for some time. I had put in it that we would protect ethnic minorities, that we would ensure the safety of them and their families, that they would be treated with dignity as officers and men according to the Geneva Convention. So it is not unconditional. Where would you find all these conditions laid down?"

But he said no.

I listened to the arguments for some time. His aides like Farman Ali were advising him not to surrender.

Finally, I told him, "Look general, you surrender, I will ensure your safety, the safety of your families, ethnic minorities, everyone. You will be treated with respect. If you don't I am afraid I can take no responsibility for what happens to you or your families. What is more, we will have no other option but to order the immediate resumption of hostilities. I give you 30 minutes."

Aurora was supposed to land soon to sign the instrument of surrender. I fervently hoped he was bringing what we had sent Manekshaw. I was alone in a very hostile environment.

The BBC and others were there, and they were all asking me questions. I didn't know what to say.

The Hamidur Rehman report says 'there was General Jacob, calmly puffing his pipe pacing up and down.'

The Hamidur Rehman report also says when they asked him why did you surrender, Niazi told them 'General Jacob blackmailed me! He threatened to hand us over to the Bahini, and that they would bayonet us.'

All rubbish. I did put pressure on him, but I didn't say I would hand him over to the Mukti Bahini for them to massacre. I said I would not be responsible. I never said I would hand them over. That's a lie. In fact, in the Hamidur Rehman report, one of the officers who was present said Jacob never used the word bayonet.

Anyway, I was wondering what was going to happen as I walked back after half an hour. The paper I gave him was lying on the table.

"General, do you accept this paper?" I asked.

He kept quiet, he didn't answer. I asked him three times.

So I picked it up, and held it high, and said, "I take it that it is accepted."

The instrument of surrender

There were tears were in his eyes. There were glares from the other Pakistani generals and admirals.

I had no advice, no orders, other than to get a surrender. I didn't know what was going to be signed.

What came to be signed had to be re-signed in Calcutta two weeks later. The signed document was wrong.

I will surrender in my office, Niazi said.

I said no, I have already given instructions that you will surrender at the racecourse, in front of the people of Dhaka.

"You will," I said. "You will also provide a guard of honour." Image: Niazi, Brigadiers Sant Singh and Shubeg Singh and Jacob just before the signing of the instrument of surrender. 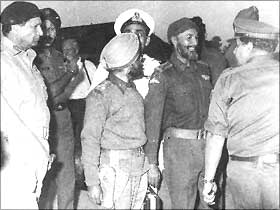 I made my own modalities for the surrender.

This surrender is unique, the only public surrender in history where a ceasefire was converted into surrender and signed in four hours. Niazi had the capacity to fight on for two to three weeks, and the UN was in session.

He was taken to task by the Hamidur Rehman report, which said not only had he agreed to surrender but he had shamefully agreed to a public surrender and guard of honour when he could have fought on for some weeks, enabling the UN to intervene.

Then there was that lunch which Gavin Young (of the Independent, London, who won the IPC's International Reporter of the Year Award for his coverage from Dacca of the 1971 War) described as the Surrender Lunch, with all the silverware laid out.

Khara (my staff officer) and I stood aside, we didn't touch anything, not even a drop of water.

After that, while we were going to the airport in Niazi's car, the Mukti Bahini stopped the car and jumped on it. Fortunately my staff officer Khara was a Sikh, he put his turbaned head out, and shouted at them.

Near the airport, I saw a few of our troops trickling in. I saw two para boys in a jeep and I took them with me. When I got to the airport, Tiger Siddiqi turned up with a truckload of Mukti Bahini. I don't know why, but I felt he wanted to shoot Niazi.

If Niazi was killed at the airport, there would be no surrender.

Then Aurora and his entourage, including his wife, landed. I was supposed to travel with Niazi and Aurora, but I was told to make way for Mrs Aurora. She was more important. Since everyone else had gone, and this was the last car, I hitched a ride in a truck.

After the signing, the crowd was wanting to lynch Niazi. We had very few troops there. So we had put a cordon around Niazi, put him in an army jeep which whisked him away. 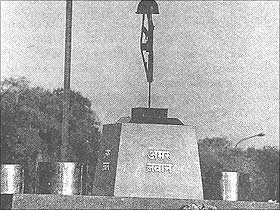 We lost 1,400 men; 4,000 were wounded. The credit for our victory should go to the officers and men who fought gallantly against stiff resistance by the Pakistanis.

Due credit must go to Indira Gandhi who displayed courage and determination throughout the crisis. She stood up to (US President Richard M) Nixon and the UN, and led the country to its greatest victory.

We took 93,000 prisoners. The rifle and bayonet at the Amar Jawan memorial in New Delhi belong to an unknown soldier who gave his life in the Jessore sector.

Let us not forget their sacrifice.

Should India have helped Bangladesh? Tell us!

'I had fought for undivided India'