Source: PTI
August 30, 2006 14:37 IST
Mohammad Musfeer Ashraf, a member of the Abu Salem gang and an accused in the murder of film actress Manisha Koirala's secretary, was arrested near Narauli crossing on the outskirts of the town.

Ashraf was nabbed on Tuesday night near the crossing while he was making plans to leave for Kanpur, district police chief Naveen Arora told reporters in Mumbai on Wednesday.

He said Ashraf was a member of the Abu Salem gang and was also wanted in connection with the killing of Koirala's secretary. Ashraf ran a hawala racket and indulged in smuggling of prohibitted weapons, he added. 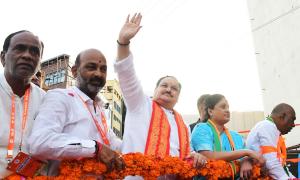