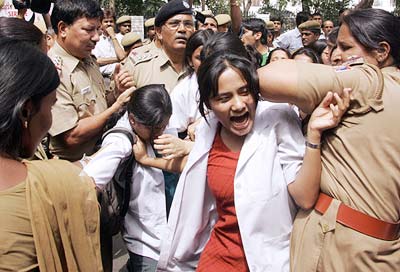 Medical students clash with police as they stage a protest against a government recommendation to make a 27.5 percent reservation for backward classes in the education sector and in government jobs, in New Delhi April 26. Hundreds of medical students protested against the Congress-led UPA government proposed move to reserve seats in elite institutions saying the proposal, if implemented, would create "quota doctors" which would have "disastrous" consequences.

The students were prevented from demonstrating outside Human Resources Development Minister Arjun Singh's residence. The protestors, who were removed by the police from Singh's 17 Akbar Road residence, later demonstrated at Jantar Mantar, raising slogans against the minister. The protestors included students from premier medical colleges including the All India Institute of Medical Sciences, Lady Hardinge Medical College and Maulana Azad Medical College.

Should there be quotas in IIMs, IITs? Tell us