He died on the road to Patna 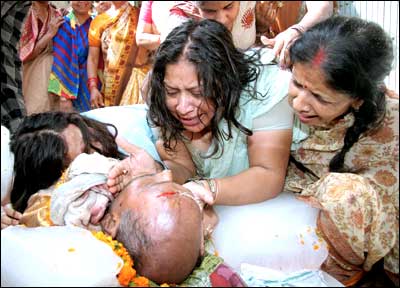 The wife (right) and daughter (centre) of  Akhileshwar Prasad, deputy police superintendent of Bikramganj, break down, after his body is brought home.

Prasad was injured in an encounter with Maoist guerillas at Majhoulia village in the Rohas district of Bihar near Patna on April 3.

The police were acting on a tip-off that Yash Kumar, the kidnapped two-year-old son of  defence employee Surendra Singh was being held at Majhoulia. The 50 odd rebels and the police team, led by Prasad, exchanged some 500 rounds of fire before the guerillas escaped unharmed.

Prasad was admitted to the local district hospital but required more specialised treatment and was transferred to Patna. He died before he could reach Patna.

Also see: Who are Naxalites?