The first one was the visit to India of US Assistant Secretary of State Averell Harriman and British Secretary for Commonwealth Relations Duncan Sandys on November 22, 1962.

This was the day China declared a unilateral ceasefire in the war with India. The visit was supposedly to assess India's needs to resist Communist China. But both envoys 'made clear their governments' willingness to provide military assistance to India but pointed out the related need for negotiations to resolve the Kashmir dispute.' 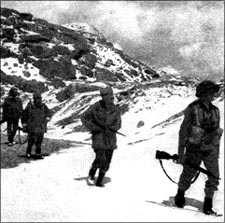 Photograph: Indian troops patrol at 14,500 feet in Nathu La, Sikkim. The Indian Army placed a considerable chunk of its forces in the east to check any Chinese attempt to open a 'second front' during the war with Pakistan. Photograph courtesy: Bharat Rakshak

A clear signal was given to India -- yet to recover from the blackest month of her history -- that she had to compromise on Kashmir.

Consequently six rounds of talks between India and Pakistan were held to find a solution for the vexed issue, but to no avail. However, Ayub Khan, the Pakistani president, must have taken the Western intervention as an encouragement for his claim.

The second factor came into the picture soon: Pakistan began a dangerous liaison with China. On March 2 1963, (between the 3rd and 4th round of Indo-Pakistani talks), Zulfiqar Ali Bhutto and Chen Yi signed an agreement in Beijing graciously offering more than 5,000 sq km of Kashmir territory to China.

This made the US State Department stop to think. With Pakistan getting closer to China, should Washington continue its military assistance to Pakistan?

While continuing to squeeze India on Kashmir, the Western Powers were getting uncomfortable with the strange situation. They were supplying armaments to Pakistan, which in turn was flirting with Communist China.

In a long letter to India's chief ministers on May 23, 1963, Prime Minister Jawaharlal Nehru lucidly pointed out: 'Pakistan has been and continues to be a headache. By a curious quirk of circumstance this has got tied up with the Chinese menace. Surely, there must be few instances in history of a country tying itself up with military alliances against some of the countries, in the present case, Communist countries, and then suddenly turning over and coming to an understanding with one of these Communist countries.'

'They (the US and the British) realise, I suppose, that Pakistan is slowly slipping away from their influence. They try to prevent this by bringing pressure on India to come to a settlement with Pakistan about Kashmir. Because of Chinese aggression on us, Pakistan's appetite has grown tremendously and she feels that now is the time to extract the most from us.'

In Washington, the Kennedy and then the Johnson administration considered 're-balancing' their assistance between Indian and Pakistan. After a visit to the subcontinent in December 1963, General Taylor, the Chairman of the Joint Chiefs of Staff wrote to the US Defence Secretary: 'But in spite of (Ayub's) strong objections of US help to India, I have the feeling that while he is swallowing hard, it is going down.'

Ayub Khan would have to swallow the pill: if he wanted US support, there was no way that the love story with Beijing could continue. At the same time, the general sensed that Pakistan's dream to rule over the Kashnmir valley was fading away.

He thought of the same solution as Jinnah in 1947: to organise infiltrations into Kashmir by troops in mufti who would create a popular insurrection. The scheme could succeed if it was better prepared than in September/October 1947. The Pakistani planners thought that through an 'Algerian-type' people's struggle for self-determination, it would not be long before the people of the valley started asking for their reattachment to Pakistan.

Air Marshal Asghar Khan, the then Pakistan Air Force chief, wrote that Operation Gibraltar was based on three assumptions: the raiders would receive the support of the local population, India would limit its retaliation to 'Azad Kashmir' and finally and most importantly, that the Indian troops would in no circumstance cross the international border.

One more assumption was that Beijing would intervene in the conflict and support Pakistan by opening another military front against India.

The first assumption failed simply because most of the raiders the Gibraltar Force were foreign to the Kashmir valley, they did not speak the language, and did not even know that the metric system was in use in Kashmir. When the strategic pass of Haji Pir opening the gate to 'Azad Kashmir' fell into Indian hands, the Pakistani military rulers realised that Op Gibraltar would not succeed.

They then hatched a new scheme: Op Grand Slam. The intention was to capture and destroy the Akhnur bridge (in an area known as 'Chicken Neck'); this would cut the road which was the umbilical cord for the valley, completely isolating it from Jammu, 30 km away from Akhnur.

With the fate of Kashmir in the balance, then prime minister Lal Bahadur Shastri took a bold, unexpected decision: India would cross the International Border and advance toward Sialkot. On September 5, 1965 at 5 am, the Indian Army moved into Pakistan.

The rest of the operation is history.

The last assumption was that a Chinese threat would cow down the Indian leadership and eventually force India to reposition some of her limited forces on the new front extending from NEFA (North Eastern Frontier Alliance, now the states of northeast India) to Ladakh.

But despite the close relation newly developing between Pakistan and China, it was not on Beijing's agenda to support Pakistan in a war with India.

The best proof is the transcript of a long meeting between Zhou Enlai, the Chinese premier, and Ayub Khan on April 2, 1965 in Karachi. The entire discussion focused around the US role in Vietnam. Zhou wanted the US to know (through the intermediary of Ayub Khan) that Beijing 'will go to Vietnam if Vietnam is in need, as we did in Korea' and if 'the US expands (the war) to Chinese territory, the war will have no limits.'

A military map recently released by the CIA shows that only 61,000 Chinese troops were deployed in the Tibet military region compared to 151,000 in Kunming and 327,000 in Guangzhou regions. This shows that the real focus of China's military forces in 1965 was to assist Ho Chi Minh's 'people's revolution' in Vietnam.

Around that time a secret report prepared by the CIA stated that the objectives of China's foreign policy were 'to eject the West from Asia to increase the influence of Communist China in Asia and through the underdeveloped areas of the world and supplant the influence of the USSR in the world.'

If China could weaken an India already entangled in its conflict with Pakistan, without having to recourse to war, Beijing would come closer to some these objectives.

After India crossed the International Border, things moved faster. On September 7, the ambassador of Pakistan to China met Liu Shaoqi, the Chinese head of state, with a letter from Ayub Khan requesting Chinese assistance.

The next day, the epistolary attack on India started. Beijing began accusing Delhi of having sent patrols which trespassed on the Chinese side of the Line of Actual Control in the Aksai Chin region and in Sikkim. For the first time since the 1962 conflict, these alleged intrusions were linked to the situation in Kashmir.

The Note says: 'They are by no means accidental, occurring as they did at a time when the Indian government was carrying out armed suppression against the people in Kashmir and unleashing and expanding its armed aggression against Pakistan. Facts have proved once again that India has not the slightest respect for its neighbours but makes incursions, harassment and encroachments upon them whenever there is a chance.'

Of course, the Indian Army had not intruded into Chinese territory, but allegations did not cost Beijing anything.

On September 12, India replied citing the Pakistani infiltrations and then the full-fledged Pakistani attack (which had been acknowledged by the UN: 'These are facts which are well-known to the world.'

On September 16, the tone mounted again; Beijing accused Delhi to have built structures on the Chinese side of the Sikkim-China border and rejected the Indian denial: '(The Indian note) further shamelessly asserts that Indian troops have never crossed the Sikkim-China boundary... and that India has not built any military works either on the Chinese side of the border... This is a bare faced lie.' The Note ended with a threat, India had to withdraw; 'otherwise, the Indian government must bear full responsibility for all the grave consequences arising therefrom.'

The next day, Delhi which could not afford to start a fresh front, informed Beijing that it was ready for a joint inspection of the Sikkim-China border, 'If any structures are found on the Tibet side of the border, there can be no objection to their being demolished.'

Regarding China's stand on Kashmir, the Note stated: 'it is nothing but interference on the part of China calculated to prolong and to enlarge the conflict.'

The tension continued to mount as the matter was discussed by the Security Council. By that time, Delhi had informed Moscow and Washington of the Chinese ultimatum. For once, the leaders of the two blocs agreed that the Kashmir issue had to be solved through the Security Council and China had no business to interfere.

The Chinese threatening notes however increased the pressure on India to compromise. On September 19, the Chinese sent a new ultimatum (for the day of the ceasfire September 22): 'From their own experience the Chinese people can deeply understand how Pakistan has been bullied by the Indian government. The Chinese government gives all-out support to the people of Kashmir in their struggle for the right of national self-determination.'

The exchange of notes continued during the following days, but as stated in the Indian Official Report of the 1965 War: 'in real sense (China) had neither any intention nor any capacity to strike against India.'

Finally a ceasefire was accepted by India and Pakistan on September 22/23. The exchanges of notes and allegations/denials continued, but the military urgency to defend a second front had disappeared.

Ironically, nobody knew at that time that the Chinese leadership was in total disarray.

Though the Cultural Revolution had not officially started, the leadership struggle between Mao, Jiang Qing (Mao's wife) and Lin Biao (the defence minister) on one side and Liu Shaoqi and Deng Xiaoping on the other had started. Mao had sent all his staff and security (known as Group One) in the 'countryside' to work in the fields with the peasants.

Lin Biao was very sick, spending most of his time in hospital. Further there was a violent struggle between Lin Biao and Luo Ruiqing, the PLA chief. Lin Biao believed that ideology was the most important factor in war, while Luo wanted the PLA to acquire modern equipment and receive a proper training.

Around the same time, Yang Shangkun who later became Chinese president was purged by Mao for being too close to Liu Shaoqi. With many of the main players either purged or 'sent to the countryside', Zhou Enlai complained that nothing could be done in Beijing: 'we have so few capable people (left].' In this condition, it is impossible to envisage that the Chinese leadership was serious to open a new front against India.

But the bluff worked well: it tremendously increased the pressure on Shastri and his government, forcing him to agree to a ceasefire just when the tide had turned in India's favour on the battlefield.