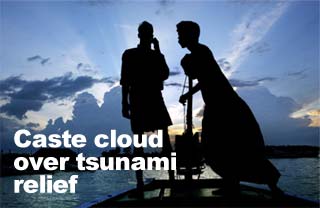 Mary Kalyani has a simple question for the authorities: "Why are we treated like dogs and not like human beings?"

Kalyani, who lives in Chennai, is one of the thousands who lost everything to the tsunami that unleashed death and destruction across South Asia on December 26, 2004. She is also a Dalit -- the lowest strata of the caste hierarchy -- and not from the fishing community.

A United Nations study conducted in conjunction with the Asian Development Bank and the World Bank estimates that 20 percent of the tsunami-affected people are not fishermen, but engaged in agriculture and small and micro enterprises.

Most of them are Dalits.

Generally, fishermen live close to the sea. Dalits live next to them and work for the fishermen when they go out to the sea. The unwritten law is that only the fishing community can fish in the sea. Other communities can only help them. So, Dalits assist fishermen in making nets and selling their catch. Many Dalit women carry fish to the towns to sell. Dalits also cultivate on 'borrowed' land.

"Dalits lost their houses, their cultivation, everything (to the tsunami). Because they are not into fishing, these losses were not taken into consideration at all by the government," said V Karuppan, a former civil servant who is the convener of the National Campaign for Dalit Human Rights. "That was the first discrimination the Dalits faced."

In urban areas, mainly in places like Chennai, the fishing community live in government-allotted houses. They rent out the area in front of their houses to Dalit labourers. So, in these areas, it is not the fishermen but the Dalits who live close to the sea, but on illegal, unauthorised land.

Tsunami: picking up the threads

"I have been living in this area for the last 16 years. We lost everything to the tsunami," says Ramani, a Dalit who lives in Uroorkuppam in Chennai. "The fishermen drove us away from temporary shelters. They did not even allow us to have the food the government and the NGOs (non-government organisations) distributed. The government says only the fishermen lost everything. What about us, people who have voter's id card, ration card and electricity card? Do we exist only when they (politicians) need our votes?"

Sudhamma, who lives in Thiruvanmiyoorkuppam in Chennai, echoed Ramani. "When an NGO gave us food, the fishermen started abusing us; they even snatched the food that we had accepted," she complained. "We spent days and nights on the footpath -- we were not allowed inside the temporary shelter."

When Vallimayil, who works as a maid, asked some government officers for help, they allegedly asked her: 'Are you willing to do anything?'

"This is the kind of humiliation we have to face," she said.

The NCDHR, the Human Rights Forum for Dalit Liberation and the Dalit Mannurimai Kootamaippu held a national public hearing in Chennai on discrimination against Dalits in tsunami relief and rehabilitation. The organisers informed the gathering that though the Tamil Nadu government had issued nearly 175 Government Orders after the tsunami, none took into account relief and rehabilitation for Dalits.

GO 583 speaks of livelihood and refers only to fishermen while GO 8 refers only to 'marine' fishermen. What about the backwater fishermen, some of whom are Dalits, the organisers asked.

"Because the GOs refer only to fishermen, relief did not reach the Dalits," said Karuppan.

It was also alleged that when the government was assessing tsunami damage in the first half of January, livestock owned by Dalits was not taken into account.

"Only when they (Dalits) blocked roads and put intense pressure was a re-enumeration started," said one of the organisers. "The outcome: The government wrote that the Dalits had no evidence of possession."

The question that was raised at the public hearing was: If there are fishermen next to the sea, and they have a total of 15 GOs that identify them as affected and there are two GOs for the sake of farmers who live further inland, why is it that the band of labourers who live physically between these two communities have no GOs that speak about their plight?

The organisers blamed the fishing community too for discriminating against the Dalits. About 210 Dalits had to walk 21 km to Mayiladuthurai when fishermen drove them out of a temporary tsunami shelter in Seerkazhi district, it was alleged. "The government officials turned a blind eye to it. The same thing happened in Tharangambadi district. Here, the Dalits were not given food for three days," said one of the organisers.

The heroes by the sea

The Dalit forum has asked for a white paper from the government about how much money was spent on fishermen and how much on Dalits. "Similarly, Dalits did not get the 60 kg rice and Rs 1000 a month promised by the government though the fishermen got both," said an activist.

The tsunami waves brought in seawater as much as 3 km inland. As 22,000 hectares of agricultural land was inundated, the winter crop that was ready for harvest in January was completely destroyed. The soil turned brackish, rendering it unfit for agriculture. The NCHDR estimates the loss to agriculture and livestock in India at over $37 million.

But Rajeswari of Odaikuppam, like Kalyani, has a smaller problem. "All that we had saved is gone with the waves. But according to the government, we don't exist."

Next week: The God of Small People. Life in the Andamans after the tsunami. Don't miss it!