By T P Sreenivasan
September 13, 2005 19:02 IST
With all its negative elements, George Perkovich's critique of the India-US nuclear deal (Faulty Promises: Carnegie Endowment for International Peace) is essentially sympathetic to India and its conclusion is not an unfair one.

'On balance, the USIndia nuclear deal as proposed will accomplish less lasting good than its champions hail and less lasting harm than its detractors bemoan. It will result in many unforeseen frustrations and dashed expectations, a bit of temporary good will, and new fissures in an already fracturing global nonproliferation regime,' says Perkovich.

But the alternative he suggests of changing the laws only to permit supply of fuel to Indian civilian installations is far too inadequate to accomplish a breakthrough in India-US relations. 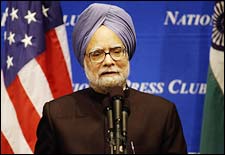 No one, not even the negotiators, have claimed that either the nuclear deal of July is done or that there will be no frustrations in its implementation. The goodwill generated has come at the right moment and as long as the US does not expect that India will now send troops to Iraq, cancel its proposal for an Iran pipeline or deploy the Indian Navy to help the US defend Taiwan, it need not be temporary.

As for the nonproliferation regime of 1967 vintage, more harm has been done to it at NPT review conferences rather than at India-US parleys.

Perkovich does not reject the six premises on which, he thinks, the US approach to the deal is based, but questions the extent to which they will serve US interests.

The China angle, undoubtedly, has been a factor in the strategic calculations of the US, but its importance is often overstated. Nobody should believe that India is seen as the only card that the US has to counter the Chinese moves in the political, economic and strategic fields.

Do we really need the nuclear deal with the US?

The US won the Cold War by confronting the Soviet Union frontally rather than by creating balancing forces. Its support to West Europe and NATO was not an opportunistic, but a historic commitment. The US strategy for China is a mix of cooperation, accommodation and competition. The US has built so many links with China that China itself stands to gain by strengthening these links.

Perkovich's contention that its deal with India will not enhance significantly its ability to contain China is, therefore, not a startling revelation.

The other premises are the intrinsic importance of India as an emerging global power, India's need for nuclear energy to fuel economic growth and the anomalies in the non-proliferation regime, which need to be corrected in order to bring India into the fold.

'US wants to cap our nuclear programme'

Here, Perkovich disputes the viability of the Indian nuclear programme and quotes statistics from Indian sources to prove that the projection of electricity generation of 10,000 mw in 2010 and 20,000 mw in 2020 is unrealistic. He thinks that India's needs would be better served with greater inputs in agriculture and the cost-effective Iran pipeline deal, which the US seems to block.

First of all, development of other areas of economic activity and enhancement of energy supplies are very much a part of the new partnership with the US. Moreover, the Indian nuclear programme is slow and expensive precisely because it has remained in isolation from the technological development in the rest of the world and is engaged in reinventing the wheel. The availability of nuclear reactors and other material will certainly enhance the efficiency of the programme.

The thrust of Perkovich's argument, however, is that the deal would undermine the rule based system of non-proliferation presently in place and that it goes against the non-proliferation objectives of the Bush administration. It would set a precedent for China to support the programmes of Pakistan and Iran and thus create a balance to the US.

PM's visit: Focus will be on nuclear issue

The fact of the matter is that the existence of a rule based system has not prevented a dozen countries from undermining it in various ways. Clandestine acquisition of nuclear technology has been detected in several countries. The biggest blow to the system came from the nuclear weapon states themselves when they openly walked away from their commitment to nuclear disarmament.

The resources made available for the development of peaceful uses of nuclear energy have been dwindling year by year. A legal exception made in the case of India will not undermine the regime any more than these instances of frequent violation of the rules. It is for this reason that the nuclear watchdog, the International Atomic Energy Agency (IAEA) has warmly welcomed the India-US deal.

'We are breaking rules to accommodate India'


Lack of clarity on India's position on production of fissile material and its unwillingness to sign the Comprehensive Test Ban Treaty (CTBT) are the other two concerns.

Perkovich's point is that India has not done what the nuclear weapon states have done on these matters. In the case of fissile material, India should have agreed to a moratorium rather than promise to sign a treaty when it is negotiated. 'Offering the false promise of a treaty as opposed to a moratorium, is so cynical that even administration officials laugh about it privately,' he says.

He himself reminds us that China is not part of the moratorium, but does not mention Pakistan. In the same breath, Perkovich pooh-poohs the Indian moratorium on tests and demands the signing of the CTBT, which stands rejected by the US Senate.

Perkovich has 'a less radical, more balanced alternative plan' which basically allows nuclear fuel for Indian civilian installations. According to him, supply of fuel would demonstrate the resilience of the non-proliferation regime rather than undermine it. In any event, as he himself notes, this is the only concrete outcome of the deal so far and all other promises are conditional to various developments on which the two governments do not have absolute control.

The acceptance of the deal by the US Congress and the Nuclear Suppliers Group is as unsure as a judicious and acceptable separation by India of its civilian and military installations. Mutuality is the key to the successful implementation of the deal. In the meantime, it is only logical for supply of fuel to begin.

'Energy is our most crucial need'

Perkovich supports such supplies not just because it will serve India's needs, but also because it is likely to prevent India from separation of plutonium from spent fuel, with all its proliferation risks. In other words, foreign fuel will serve as an alternative to plutonium processing. As long as India does not agree to suspend production of fissile material, no nuclear reactors would be supplied.

If resumption of supplies of fuel is the only measure on offer in return for placing Indian civilian installations under safeguards, strengthening the export control regime, maintaining a moratorium on tests and for such other nuclear restraints, the deal will be struck down in India itself. As it is, the deal has been opposed both by the right and the left. In their view, India has already paid too much of a price for the package offered by the US.

The Perkovich alternative is far too inadequate to find acceptance in India.