India is pumping its arms 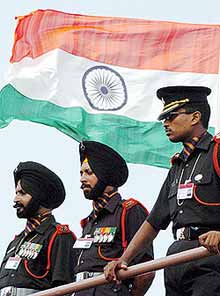 India was the leading buyer of conventional arms among developing nations in 2004, says a United States Congressional Research Service report.

Last year, India entered into agreements with arms manufacturers across the globe to buy weapons worth $5.7 billion, ahead of China. But New Delhi's defence expenditure for 2004-2005 was pegged at 2.5 percent of its gross domestic product, much lower than Beijing's 6 percent and Islamabad's 5.5 percent.

'The massive Indian defence spending has its implications for Pakistan's national security,' the brief said. 'It fits in with the Indian aggressive posture towards Pakistan and its policy of non-dialogue. While India has been sharply increasing its defence expenditure, Pakistan's defence budget during the last three years has remained almost static with considerable decrease in real terms.'

In the year 2004-2005, the first budget the Manmohan Singh government presented had set apart the biggest-ever allocation for defence: Rs 770 billion (about $17 billion). It was an increase of 27 percent over the Rs 653 billion (about $14.5 billion) that the previous Atal Bihari Vajpayee government had allocated for defence.

About 44 percent of the defence outlay went for the purchase of weapon systems. So, just what did New Delhi shop for with that whopping budget? 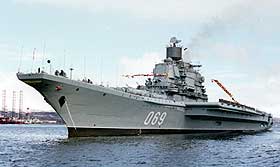 On January 20, 2004, India and Russia signed an agreement for acquiring the massive Russian aircraft carrier. The 44,570-ton aircraft carrier is expected to join service by around 2009. Besides being fully modernised, the carrier would have 12 MiG-29K fighter aircraft, four MiG-29KUB training jets, six to eight Kamov-28 Helix-A and Ka-31 Helix-B helicopters. It will join the INS Viraat as India's second aircraft carrier, and wait for another few years for India's indigenously built new carrier to join in. Around Gorshkov, the Indian Navy wants to build a robust fleet, ready for the turbulence of 21st century seas.

The Indian Air Force is acquiring 66 Haw advanced jet trainers for training its fighter pilots for transition from sub-sonic aircraft to supersonic fighters. 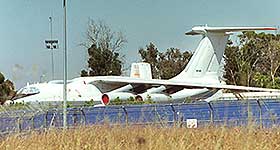 On March 5, 2004, India and Israel signed an agreement for the supply of three Phalcon systems, which were earlier denied to China under US pressure. This eye in the sky will provide India real-time surveillance of the sky in a radius of about 100 km, as well as moving command and control centres in the sky. One of the greatest force multipliers, Phalcon would make the Indian Air Force several notches superior to Pakistan, and provides it a strategic edge over even the Chinese.

According to Israeli defence ministry's figures, India is the number one customer of Israeli-manufactured arms. In 2004, new contracts were signed between the Indian defence ministry and Israeli companies to the tune of $1.7 billion. Of this, $1.1 billion came from India's purchase of three early warning Phalcon planes from Israel Aicraft Industries and its subsidiary Elta Electronics.

India also bought fighting equipment and systems from Israeli firms to the tune of $500 million.

India continues to buy in a major way from Russia, while it continues to build on its relations with Israel, and West European powers. The US, which is the largest supplier of arms to developing nations, is increasingly making a feverish pitch to tap the market in India.