The Wolfpack in action

In this second extract from The India Pakistan Air War of 1965, we look at how four Gnats got into a dogfight with the superior Pakistani Sabres, and won.

Part I: On a wing and a  prayer

September 19, 1965: That afternoon, a flight of four Mysteres of 1 Squadron was detailed to carry out an offensive sortie in the Chawinda-Pasrur Sector.

9 (Wolf Packs) Squadron was given the task of providing escort to the four Mysteres. The Gnats consisted of two sections. The first was led by Squadron Leader Denzil Keelor with Flying Officer 'Munna' Rai as his wingman. Flight Lieutenant Viney `Kaddu' Kapila - with Flight Lieutenant Vijay Mayadev as No.4 - led the second section.

The Mystere and Gnat formation made its way to the target area at Chawinda at low-level and were greeted with anti-aircraft fire. Kapila spotted a formation of four Sabres ahead and above at 2000 feet and called out his sighting on the R/T to Keelor and JP Singh.

Singh decided to make a single pass over the target area and exit quickly without hanging around for a second pass. About this time, Mayadev, the No.4 in the formation, also called out a warning on the R/T about the four Sabres. Keelor put the formation in a shallow climbing turn to bring the Gnats in a favourable position.

The four Sabres - from Sargodha's 17 PAF Squadron - were being led by their CO, Squadron Leader Azim Daudpota. Neither Daudpota nor his wingmen noticed the four Gnats led by Keelor come in at low level behind them. As Keelor began maneuvering the Gnats behind the Sabres, they were noticed and a quick call put the Sabres into a defensive break. The Gnats split up in two sections. Keelor and Rai went after one pair of Sabres, and Kapila and Mayadev after the other.

When Keelor followed the first pair of Sabres in a tight turn, Rai lost visual contact with both Keelor and the Sabres. 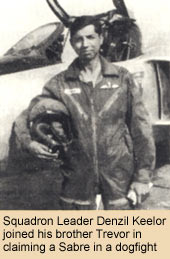 Keelor instructed Rai on the R/T to set course for Adampur and to get out of the fight, which Rai complied with immediately. This left Keelor tangling with the first section of two Sabres.

Meanwhile Kapila and Mayadev got behind the second section of the Sabres, who then reversed their turn and broke into the attackers. By the time the Gnats recovered from this maneuver Kapila found himself at a very low altitude, less than 100 feet from the ground and flying at treetop height. However he still had one of the Sabres in his gyro sight.

The Sabre tried to shake off Kapila by first engaging into a steep turn starboard and then again in the opposite direction to port. Kapila had by this time jettisoned his drop tanks, which gave him a slight edge in maneuverability. He accelerated and opened fired with his cannon at 500 yards, scoring direct hits on the Sabre.

The Gnats had met the Sabres at an altitude of 1500 feet, and now the Sabre - damaged by Kapila's first burst - fell back. Kapila fired a second burst from 300 yards and again the cannon shells tore into the Sabre. Its pilot though, still executed turns and breaks to shake off Kapila who in quick succession let off two more bursts. As he finished the third burst, scoring more hits on the Sabre, he noticed the Sabre begin to roll over.

Kapila broke off the attack and hauled his Gnat vertically upward as he heard Keelor's call on the R/T, "Kaps you hit him!". Kapila banked his aircraft and saw the Sabre hit the ground, but neither he nor Keelor saw the pilot ejecting.

Keelor, meanwhile, was not only keeping an eye on his two adversary Sabres but also on Kapila's section, giving them periodic 'tail clear' messages. He missed seeing the No.4 Sabre from the PAF formation - flown by Flying Officer Saif-Ul Azam - sneak in behind Kapila's section and get on Mayadev's tail. Mayadev's tail and elevator surfaces were riddled with .50 caliber bullets by Azam's gunfire. Mayadev ejected barely 500 feet above the ground from his stricken Gnat.

Having lost contact with Mayadev's Gnat, Kapila looked around to spot Keelor's Gnat and turned around to join him. By that time Keelor had observed another Sabre break out of the melee and head for safety. He put his Gnat into pursuit.

The Sabre failed to notice the Gnat and did a hard turn to the right, which bought it within range of Keelor's guns. The Sabre was hit and started streaming smoke and losing altitude. Keelor pulled out of the attack as his closing speed was high and he had lost enough altitude to be skimming the treetops.

As the Sabre started moving away, Kapila came in to deliver the coup-de-grace with a well-aimed cannon burst. However once again, Kapila's guns jammed after the initial burst and he had to pull out of the attack. His gun camera film clearly showed Keelor's smoking target in his sights.

Subsequent analysis on gun camera film and combat reports at Halwara and Adampur resulted in both Keelor and Kapila being awarded aircombat kills and the Vir Chakra at the end of the war.

The Sabre kill by Denzil earned the Keelor family a unique distinction. Both the brothers now had Sabres to their credit and both earned the Vir Chakra, making it the first time brothers had won the Vir Chakra for identical feats.

Extract and picture from The India Pakistan Air War of 1965, PVS Jagan Mohan and Samir Chopra.