Buta is not exactly Mr Popular 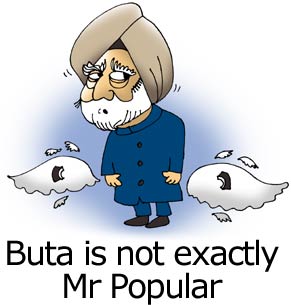 Despite gentle hints from senior Congress leaders, Bihar Governor Buta Singh refused to quit following the Supreme Court order holding the dissolution of the state assembly 'unconstitutional.' Instead, he placed the ball back in the Centre's court, stating he had merely sent his report while it was the UPA government's decision.

In other words, he refused to become the scapegoat for what was a collective act.

But after President A P J Kalam summoned the PM within hours of the court order and ticked him off, Manmohan Singh conveyed his own anguish to senior Congress leaders.

To assuage Kalam's feelings and lighten the blow to the government, a few emissaries of the Congress high command tried persuading Buta to put in his papers. But he would have none of it.

Rashtrapati Bhavan was in an unforgiving mood though. At the President's instance, the government decided to clip the governor's wings.

An indication was present last week when, despite frantic efforts, neither Sonia Gandhi nor the PM nor, for that matter, Home Minister Shivraj Patil agreed to meet Buta who had camped in New Delhi for several days.

Ostensibly in the capital in connection with a private family matter, the governor nonetheless scheduled a press conference to hold forth on foolproof arrangements made for the first round of polling in Bihar. He reckoned that, as head of the state under President's rule, it was his duty to ensure a free and fair poll.

But a last minute missive from Rashtrapati Bhavan put paid to Buta's plan. He was told in no uncertain terms that he should desist from meeting the press.

Sinha was told not to furnish any information as Buta had no right discussing those matters.

The curse of the nouveau rich

Delhi's Page 3 folk have caused a storm at a quiet hill station in Himachal Pradesh.

The blue-blooded gentry that have owned property in Kasauli all along are fuming at the invasion of the capital's nouveau rich who, with a questionable building project, have come to acquire garish bungalows right next to the Air Force Station.

Surprisingly, the previous NDA government didn't insist on honouring the sanctity of regulations that barred private construction within 900 metres of the outer boundary of an air force station.

Some time ago, bonafide house owners in Kasauli, including the widow of the late diplomat B K Nehru, celebrated writer Khushwant Singh, and evergreen crusader Baljit Malik, formed the Society for the Protection of Kasauli Environment, challenging the new block of bungalows in a PIL submitted to the High Court.

Unmindful of the deep resentment, a Delhi-based developer has now acquired a big chunk of land nearby and is flogging small plots for the construction of semi-detached houses at a huge premium to the capital's Page 3-wallahs who felt left behind when they failed to buy into the original project a couple of years ago.

A matter of rank

K M Singh, an 1968 batch IPS officer of the Maharashtra cadre and an expert on Kashmir affairs, spent all his working life in the Intelligence Bureau.

When he couldn't be made head of the IB a few months before his retirement, he was fobbed off with the post of Director General, Central Industrial Security Force.

But thanks to M K Narayanan -- the all-powerful National Security Adviser -- Singh, upon his retirement, found himself accommodated as member of the new Disaster Management Authority. He was also given the rank of minister of state.

However, a piquant situation has arisen thanks to Narayanan's generosity towards his former protégé from his days as director, IB.

As Cabinet Secretary B K Chaturvedi -- a 1966 batch UP cadre IAS officer -- is convener of the DMA, it is rather odd that he should rank two notches lower than a member of authority.

The maverick Uma Bharti didn't reckon with stiff opposition from the RSS when she made another bid for her old job as chief minister, Madhya Pradesh.

Her ambition was further fuelled by a couple of disgruntled BJP leaders, including a former ideologue now on a forced holiday from active politics.

At one stage last week, she threatened to split the BJP legislature party. Then, RSS cadres made it plain that they would not tolerate her tantrums any longer. She was told in no uncertain terms that credit for the BJP's resounding victory in the assembly election went to the entire Sangh Parivar rather than any individual, least of all to her alone.

Realising she had no political future outside the Parivar, a chastened Bharti promptly fell in line, throwing herself into the election campaign with renewed vigour.

Before it began advertising heavily on television channels, this jewellery store was little known.

Then, the ads attracted the attention of the Income Tax authorities.

When sleuths knocked at its door to inquire about its funds, the store was ready with an explanation: Apparently, these had come from a well-known sadhu who has several ashrams in north India and can be seen preaching almost daily on a spiritual television channel.

The Janata Dal-U-BJP combine is making a strong bid for power in the ongoing Bihar assembly election. The JD-U, though a senior partner in the coalition, is woefully short of funds. It is the junior partner BJP that is graciously bankrolling its campaign as well.

Here, you are known by your cadre.

The latest directory of members issued by the Delhi Gymkhana Club Ltd lists the service of each member against his name.

Aside from the armed forces, as many as 15 civil services figure on the list.

Depending on your need, you can tap into the service of your choice while imbibing the heady brew in the imperial environs of the capital's most prestigious club.