The World Bank stands ready to assist India in any way possible in the wake of the earthquake that ravaged parts of Jammu and Kashmir and large areas in Pakistan and Pakistan-occupied Kashmir. New Delhi has not sought any help of the bank.

Praful Patel, the bank's vice president for the South Asia region, said, "The government of India has not yet asked the bank for support to reconstruction needs, but the bank stands ready to respond if needed."

Meanwhile, mindful of the grim rescue operation that will continue in South Asia for days to come, the bank said it is putting together teams of reconstruction experts and money, doubling to $40 million its initial commitment to Pakistan, which was worst affected by the earthquake.  The amount could run into hundreds of millions of dollars in the longer term.

"We will do whatever it takes to support the longer-term reconstruction but right now what counts is supporting the Government of Pakistan in getting some short-term money in so that cash can flow into the affected areas to support temporary shelter, fuel for the imminent winter and household livelihoods," he said.

Quake will be treated as national calamity: PM

Patel said donors were already engaged in the important task of coordinating their work in this early phase, pointing out that many agencies have coming together in Islamabad, pledging to work together under the Pakistan government.  Patel said the bank has committed its experts to the United Nations disaster assessment team to ensure seamless functioning.

"When a government is dealing with a disaster on this scale, the medics and the sniffer dogs must come before the bricks and mortar of reconstruction," he said.

But he argued that planning for the transition from relief to reconstruction needed to be conducted more urgently now, given that winter is due soon. "Millions of people need, in the very short term, to see some supporting structures being put into place, even if these are temporary," he said.

Thousands of Pakistanis desperate for aid

Patel said that the Bank's initial funding of $40 million would be redirected from projects in Pakistan's North West Frontier Province and Pakistan occupied Kashmir. He said the money could be used to give cash grants to affected families, to support infrastructure clearance, to address health needs, to get children back into makeshift schools and to make temporary shelters available.

Longer-term reconstruction funding will be determined on the basis of assessed need, and the bank's contribution could be expected to run into hundreds of millions of dollars, Patel said. He said Pakistan government would decide the eventual amount of World Bank funding needed. It would also depend on other sources of funding available, "including the generosity of private donations," he said.

Patel said much of the recovery effort would also involve nongovernmental organizations and local government bodies that have experience working in the affected areas. 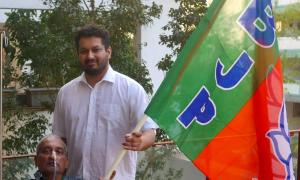