'That Muzaffarabad no longer exists'

Abrar Haider is untraceable. For the last three days, I have been trying to call his numbers in Muzaffarabad, but can't get through.

None of people in Islamabad I have spoken to on the telephone have any information about him because they too cannot contact him either on his mobile (which in any case doesn't work very well in Muzaffarabad) or on his landline.

And Abrar is no ordinary person. As the correspondent of the daily Jang in Muzaffarabad, Abrar is very well connected. But in Islamabad nobody knows how he is. Hardly surprising since Muzaffarabad is a city that no longer exists.

I met Abrar in November 2004 when I visited Pakistan-occupied Kashmir as part of a delegation of Indian journalists.

Abrar was our local contact and accompanied us everywhere we went. He would go out of his way to ensure our comfort and fill our hunger for stories by fixing interviews for us. And while on the road, travelling from Lahore to Mirpur to Islamabad to Muzaffarabad to Chakhoti and back to Muzaffarabad, he would explain the politics of "Azad" Kashmir and its relationship with Pakistan from a Kashmir nationalist's perspective.

I again met Abrar in May and once again he went out of his way to try and get me an interview with Syed Salahuddin of the Hizbul Mujahedeen. But since 'Pir sahib' was under instructions to avoid Indian journalists, there was little Abrar could do. Today, however, no one can establish contact with him.

I called Mohammad Shehzad, a journalist friend in Islamabad, to ask him what the situation was in Muzaffarabad.

According to Shehzad, there have been huge casualties among the Kashmiri militants, especially those belonging to the Indian side of the state. But Shehzad said to get the complete picture of the scene in Muzaffarabad, I should speak to another fellow journalist Arif Bahar, and asked me to wait while he called someone up to get Arif's number.

I could overhear his conversation on the other line and learnt that Arif's father had died in the earthquake. After that there was no question of calling Arif to ask him of the scene in Muzaffarabad.

But journalists being journalists must carry on. So I called Amanullah Khan, chairman of the Jammu and Kashmir Liberation Front. He was on his way to Muzaffarabad. He informed me that the road link to Muzaffarabad had been restored and relief efforts were underway. But he sounded very distressed and said that nearly 80% of the city had been destroyed.

According to Khan, Bagh and Rawalakot too have been devastated, but he said the casualties are maximum in Muzaffarabad. He put the figure at close to 20,000 in Muzaffarabad alone. He said that hardly anyone had been spared by the killer quake. Unlike most other natural calamities which take the maximum toll on the poor, this time everyone has suffered.

Khan said the commissioner of Muzaffarabad had lost his entire family and the official residences of both the 'Prime Minister' and 'President' of "Azad" Kashmir had been destroyed and they were living in tents on the lawns of their bungalows.

When asked about the possibility of a joint Indo-Pak operation to provide relief and rehabilitation, he welcomed such a step, but warned against politicising any such joint effort. Khan was of the opinion that Pakistan was probably better placed to provide relief in the Indian controlled areas and that India should allow Pakistan to undertake relief efforts in districts like Baramulla. He also felt that there was no harm in declaring a ceasefire so that militancy doesn't hamper the relief efforts. But then suddenly, the politician in Khan came to the fore and he started raving and ranting against both India and Pakistan till the line got disconnected. 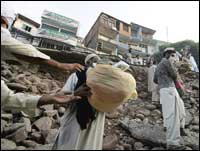 I then managed to get through to Sardar Attique Ahmed Khan, president of the ruling party in "Azad" Kashmir, the Muslim Conference, and son of the supreme leader of the party Sardar Abdul Qayyum Khan. Attique informed me that he and most of his family were safe and sound. But there had been deaths even in his family and just yesterday he buried four close relatives.

I asked him about Hotel Sangam, the hotel in which we stayed. The hotel gave a panoramic view of the confluence of River Jhelum and Neelum (Kishanganga). Attique turned emotional and said it doesn't exist anymore. In fact, the entire market along the main road has been razed to the ground. He said that the other main hotel in Muzaffarabad, Hotel Neelum, too was destroyed. And then he said something that is still ringing in my ears: "The Muzaffarabad you saw no longer exists. The houses of the prime minister and president have turned into rubble, the national bank of Pakistan has been destroyed; the post office, the police station, university, courts, main markets, telephone exchange and even the hospital -- all destroyed. The assembly building has been severely damaged."

Attique said the civil administration has collapsed completely not only because of the sheer scale of devastation, but also because there is hardly any official who has not had casualties in his family. This has hampered relief efforts. Attique said that while the Pakistan army is working on a war footing to provide some relief (so much so that air space above Muzaffarabad is getting clogged by the constant arrival of choppers to bring in supplies and evacuate the injured), the sheer scale of the effort required to save lives and provide relief is overwhelming. He said that most of the dead bodies have still not been recovered and that it was a matter of great concern. But there was little that could be done because without heavy machinery, recovering bodies from the rubble was a gigantic task.

Attique was deeply appreciative of the gesture of the Indian government to provide relief supplies to Pakistan and welcomed any possibility of joint relief and rescue operations across the Line of Control. He also issued an appeal to the militants and jihadis to cease all violent activities and observe a complete ceasefire. He was of the firm opinion that all efforts should be directed towards relief and rehabilitation of the victims.

I wanted to ask Attique about another friend I had made in Muzaffarabad, but desisted. This unlikely friend was the local ISPR chief Major Farooq. A most polite and agreeable man, Major Farooq embodied President Pervez Musharraf's 'enlightened moderation'. It would be a heart-wrenching tragedy if anything happened to him or Abrar. But thinking back over the interactions we had with the people of Muzaffarabad (who welcomed us with open arms and hearts) and representatives of civil society in the city, who held a reception for us in Hotel Neelum, the oldest hotel in the city and part of the heritage of the city, one cannot help feel terribly sad for the people of the city that once was.

By Sushant Sareen
Print this article