Natwar smarter than his party? 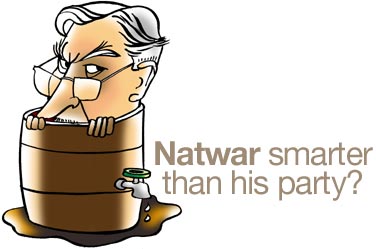 Foreign Minister K Natwar Singh, it is claimed, knew about the Paul Volcker investigation into the oil-for-food scam for some months and feared he might find an adverse mention in the report. But there was hardly anything he could possibly do to have his name deleted as one of the two non-contracting beneficiaries from India.

A couple of months before the scandal hit Natwar straight in the face, several newspapers reported how a central minister and his son were found to be involved and how the former head of the US Federal Reserve had duly taken note of their part in it.

However, neither Prime Minister Manmohan Singh nor Congress chief Sonia Gandhi knew what was coming. So, when the scandal was reported, everyone was taken by surprise.

Natwar, convener of the Congress Party's foreign affairs cell, was allegedly allocated four billion barrels of crude oil by Saddam Hussein. Of these, it is alleged, he cashed in on only half the quantity through a company called Hamdan Export. The Congress was allocated four million barrels, but lifted only one million. Is Natwar smarter than his party then?

Bhim Singh of the Panthers Party -- who figures in the Volcker report as the third non-contracting beneficiary -- has been a long-time supporter of Saddam. A politician of sorts for nearly three decades, he once threatened to sue a prominent columnist who called him a 'minor politician.' He tasted some success only in the last Jammu and Kashmir assembly election when four of his candidates were elected.

The Panthers Party chief has, on several occasions in the last couple of decades, conducted groups of journalists and others to Iraq on junkets. Although on no occasion were guests of the dictator allowed to meet him in person, they were invariably showered with gifts, including the all-important wristwatch depicting Saddam's stern visage.

The Volcker report duly testifies Bhim Singh's claim that he did not encash his entitlement of over seven million barrels of crude oil.

One of the costliest residential areas in Delhi is Sundar Nagar. Smack in the heart of Lutyens' Delhi, it is a private colony where small plots are non-existent. Hardly any house changes hands here but, on the rare occasion it does, it fetches a huge premium over prevailing market rates. For instance, a house built on a plot of, say, 800 yards, currently commands a price upwards of Rs 16 crore. Significantly, property brokers have been abuzz with the talk for some time now that a central minister's son is in the market for buying a home here. He has reportedly set aside Rs 16 crore by cheque for the purpose, but his broker hasn't succeeded in locating a seller yet.

Babus are known to solve the nation's problems, but it is unbelievable that they cannot fix minor glitches in their daily lives. A case in point is the problem of weak cellular phone signals from two of the country's largest telecom companies. The cause is obvious. The government would not allow operators to install field transmission towers on public land in Lutyens' Delhi.

The upshot is that several babus are switching to cellular services provided by government-owned companies. Former secretary, Department of Company Affairs, and now a member of the MRTP Commission, M M K Sardana was so disgusted by the service provided by one huge cellular operator in the private sector that he surrendered his phone and switched to Mahanagar Telephone Nigam Limited. Quite a few others who work and live in the four-kilometre radius of Rajpath have also switched their providers in recent months.

Official Delhi continues to be impervious to reason. Though VVIPs visiting sites of major accidents have, on numerous occasions in the past, inevitably caused disruption in relief measures, politicians of all hues, from the PM down, unfailingly show up at these places to register their presence. Manmohan Singh, though not a typical politician, has also fallen into the trap.

Following the Diwali-eve blasts in Delhi, the PM rushed to Safdarjung Hospital where most of the injured were admitted. Several hundred people were already running from pillar to post, inquiring about the well being of near and dear ones. Thoughtlessly, several hours before the PM's visit, the Special Protection Group 'sanitised' the hospital, clearing it of all visitors including close friends and relatives of victims. Worse, the only information counter was shut down. Small wonder then, that when Manmohan Singh reached the spot, he was booed.

BJP spokesman Arun Jaitley is never lost for words. Following disclosures about the KGB funding of Communists and the Congress Party, first by publication of the Mithrokhin papers and now the indictment of Natwar Singh, the legal eagle came up with a couple of clever quips.

One, that for the Congress Party and Communists, Foreign Direct Investment in specified areas of the economy is wrong, but it is most welcome in politics.

And two, unless Natwar Singh clears his name to the satisfaction of everyone, he is in danger of turning into Natwar Lal. Indeed!