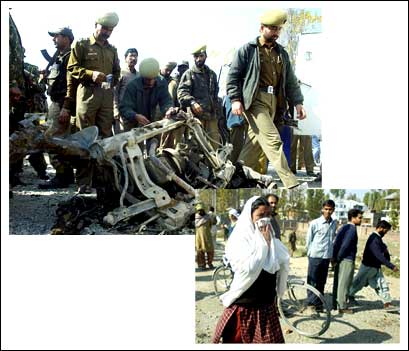 It happened a little before the swearing-in ceremony of the new chief minister of Jammu and Kashmir.

At least six people were killed in the blast, which took place about 15 kilometres from the venue of the swearing in ceremony of Congress leader Ghulam Nabi Azad.

The Srinagar Police had prior information about a militant attack though, which is why the car carrying the bomb was stopped outside Nowgam before it was detonated.

Left: Indian police look at the remains of the car used as a bomb.

Right: A Kashmiri woman wails at the site of the explosion in Nowgam, on the outskirts of Srinagar.