'The king is weakening gradually' 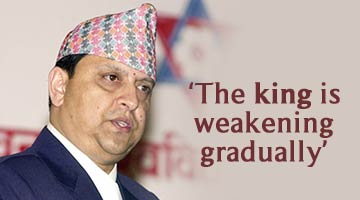 Murari Raj Sharma, who finished his four-year stint as Nepal's ambassador to the United Nations last October, was the keynote speaker at a large pro-democracy rally attended by about 400 people in Washington, DC May 15.

Sharma, who has been vocal in his protests against the February 1 takeover by King Gyanendra, returned from a secret two-week visit to Nepal earlier this month, despite fears that he might be arrested.

Now a member of the UN Advisory Committee on Administrative and Budgetary Questions, Sharma told Senior Associate Editor Ajit Jain that his appearance at the rally was at a great personal risk.

"The new regime in Nepal has already taken revenge against me by withdrawing my candidature for the next term to the United Nations Committee with which I work now. The regime will try to do more harm to me for telling you that the King and political parties must collaborate to resolve Nepal's daunting problems," he said.

What was this rally in Washington all about?

I was the chief guest and keynote speaker at the rally which was sponsored by over a dozen Nepalese organisations in North America. They included the Democratic Youth Council, America-Nepal Friendship Association, ANAC, an umbrella organisation, etc. There are about 60,000 people from the Nepalese Diaspora in the US and three to four thousand of them live in the Washington, DC area.

I think this was the largest rally of the Nepalese Diaspora that I have ever attended in the US. That shows how unhappy people are with the king's actions. There were several speakers at the rally and we all expressed concern over the developments in Nepal.

I appeared at the rally at a great personal risk. The regime will try to harm to me for telling you that the king and political parties must collaborate to resolve Nepal's daunting problems. Dictatorships rule by intimidation. But I value freedom more than I fear persecution.

But King Gyanendra has lifted the emergency.

Some students were detained but the protest was allowed to take place. There was also a protest in Katmandu by several organisations. Several hundred people participated demanding the reinstatement of democracy. Lifting of the emergency is basically cosmetic with minor breaches allowed and these are not of any serious significance.

During your recent trip to Nepal, you urged political leaders you met to draft a joint programme and present it to the king.

Given this mistrust, how do you expect the two sides to work together?

I have supported the joint program of action. The political parties in Nepal have now come up with a number of innovative ideas. One is the reinstatement of the dissolved House (the National Assembly). They have also come up with a comprehensive programme to solve the Maoist problem. They have said they will form an all-party government once Parliament is reinstated. They will start the dialogues with the Maoists and, if needed, they will be willing to have election for the Constituent Assembly. That is a new strategy that the political parties have agreed to.

But what about the king?

If he wants to resolve the problem he must accept that the political parties haven't closed their doors. Even the Maoists have agreed to respect the triangular part of the Constitution. There are three fundamental pillars of the Nepal constitution. Constitutional monarchy is inviolable in Nepal. Multi-party democracy is inviolable. Human rights are inviolable. These are politically very, very significant.

Do the Maoists accept these three pillars?

The Maoists at one point of time were agreeable to negotiate respecting the preamble. They, of course, want other parts of the constitution amended and/or changed but then the king wasn't interested.

Could there be unanimity on the preamble and the election for the constituent assembly?

I can't say whether there could be unanimity but I can see the light at the end of the tunnel. I feel political parties would agree to that. The king doesn't want to listen to them and is in no mood to negotiate. But the king is weakening gradually. Other speakers at the rally in Washington agreed to that perception.

How do you resolve the Maoist problem?

In order to resolve the Maoist problem, we need to have political strategy and the military strategy and both these have to go hand in hand. Whenever security forces go and sanitise a particular area, they have to have a political process in place as otherwise as soon as the security forces leave, the Maoists come back and you are back to square one.

What about Nepal's relations with India?

India recently sent one consignment of non-lethal weapons to Nepal. That was after the king met Indian Prime Minister Manmohan Singh in Indonesia. I don't know what the deal was between the two leaders. It never came out fully in the media. It was just the king's version.

The Indian establishment was not very happy with the one-sided statement on the part of the king, which was his version of what went on during the dialogue between the king and the prime minister.

India's U-turn for a despot

There was a slip on the part of India sending that consignment of non-lethal stuff. There were reactions in India and also in Nepal. That shipment sent a wrong signal to the king but now the situation has slightly changed. The Indian government wouldn't be as willing to provide further supplies until there are some positive developments in Nepal.

Are you in direct touch with the political leaders in Nepal?

Yes, I am in touch with the political leaders directly and through third persons. I am keeping myself informed of what is going on in the country. But I am doing all this at great personal risk. I know the dictatorships rule by intimidation. Yet I appeared at the rally in Washington DC. I did that because I value freedom more than I fear persecution.

I want the Maoists to recognise that they are sailing against the tide of time. They should renounce violence and talk to the people's legitimate government to find a political exit from the senseless bloodshed.

The king and rebels must realise that history will be a harsh judge. They should either come under a democratic tent or be prepared to accept the dark corners of political oblivion. Democracy will have room for them too if they play by its rule.

Earlier, you had said that the king made a mistake by taking it for granted that India and other countries would support his initiative in dismissing the national assembly.

Yes, it was an error on his part as the key players, like India, US, and European countries haven't supported the king's action. He thought he could win them over by portraying his action as war against terrorism. He hasn't received any support from the key players: India, Europe and the United States. India has, in fact, condemned his action, and so has the US, the United Kingdom, the European Community. China says it is the internal affair of Nepal. Pakistan, Cuba and North Korea have supported the king, but their support is dubious.

The political parties have already agreed to a joint political programme. They are now working on the code of conduct. That idea is in the final stage of approval.