'War is not a pleasant experience' 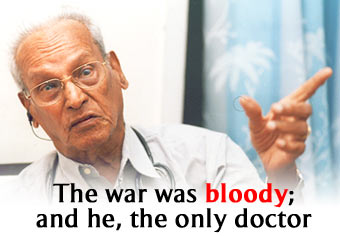 Dr S Subramaniam is 88. He still sees patients. But unlike today's doctors, he has no consultation timings; anybody can walk in at any time of the day or the night. He is always available.

A laminated certificate occupies a pride of position in his consultation room -- a certificate written and signed by Field Marshall Lord Wavell, Supreme Commander of the Allied Forces in Burma, Malaya and the Dutch East Indies (later, the Viceroy and Governor General of India), not to mention King George VI, King Emperor of India.

"I am proud of this certificate. It acknowledges what I have done for the British Army during World War II, that too in the frontline," says the doctor with a contented smile.

When the world celebrates 60 years of the end of World War II, the doctor quietly continues what he is passionate about, consulting patients. "I was never interested in money. My mind was forever on serving mankind," he states proudly.

After specialising in surgery and anaesthesia, Dr Subramaniam joined hands with the director of the Rockefeller Foundation in America and worked at the malaria research centre. So impressed was the director with Dr Subramaniam's work that he recommended the conscientious young man's name to Lord Wavell before he boarded his ship to the US. 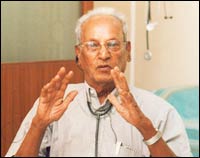 "Though I was told that I would be taken directly as a major because of the recommendation by the Rockefeller Foundation, I was finally taken in the army only as a captain. I was a captain in general medicine. That was in 1943 and the Second World War was going on. I could have joined any soft post but I wanted to do some rigorous work," says Dr Subramaniam, as his mind harked back to the year 1943.

His first posting as a captain in the British Indian Army was in Lucknow and from there, he moved to Lahore. "Lahore was a very nice station with some extremely good people. At Lahore, ten doctors from the Lahore Medical College worked with me, and I was there only for a short period. From there, I was sent to Imphal, Kohima, Shillong, etc before finally sending me to the Burma border, the war front.

"Most of these army centres were commanded by British doctors. Although as per army convention, only British doctors are posted to the sensitive areas, I was an exception. I was lucky enough to be posted in several British units. In every unit that I served, I was the only non-British officer, a doctor. And I used to be the only teetotaller in the unit! Once after a party got over at one in the night, the British officer in charge of the unit called me and said, 'Moni, you had the most expensive drink. You had three bottles of lemon squash while we had only one bottle of whiskey. The army supplies our drinks free but your squash is costly!"

The doctor had a hearty laugh thinking of the incident that occurred over 60 years ago.

The war that changed the world

World War II had intensified by then. Dr Subramaniam was sent to the Burma front where the British were fighting the Japanese.

"I still remember the bombings. It started at 4 in the morning. And I was the only doctor for the Gorkha regiment. Like in every war, there was heavy casualty every day, and it was my first experience on a war front. I had to attend to countless wounded British soldiers and Gurkhas."

"There was no hospital, not even a tent where I could treat the wounded. I had to work under trees, in the most harrowing of conditions. Imagine, it was under a tree that I treated countless wounded soldiers. It was a terrific experience for me. We had 50 stretcher-bearers under one doctor and it was our responsibility to send them to pick up the injured and the dead."

"In no time, I found to my horror that all of them had deserted the camp. In fact, when I saw a group of stretcher-bearers running away, I pointed my revolver at them, and shouted, 'I will shoot you if you run away'. Still, they ran away. I was left all alone to attend the injured. After the stretcher bearers left, I used to walk to where the injured were lying, and treat them."

There were 16 British officers with Dr Subramaniam in the unit and only six survived the war. The unit also lost thousands of Gurkhas. "I still cannot forget the face of a major who said 'Good morning' to me as we moved to the front. Not even four hours had passed since then that his dead body was brought to me. War is not a pleasant experience and it will not give you any memory that you would like to cherish."

"As the only doctor, I saw only blood, pain and death in the war. I do not know how I survived all that. I was in the front for more than a year, and it felt like ages to me at that time."

As the war went on, he was granted leave to go home. As he was travelling from the Burma border to Madras, the truck he was travelling met with a terrible accident at Kohima. There were 20 British officers, the doctor's batman and Dr Subramaniam himself. All the passengers except the doctor died in the accident but he sustained a head injury, and fractures all over his body.

What you should know about World War II

"We were travelling at night, and it must have been 4 in the morning when the accident took place. The driver must have fallen asleep. The jeep fell around 300 feet down, and all of us were thrown out of the vehicle. It was reported that all the passengers including myself had died. It was only later that some local people found me. They saw my army identity card and took me to a local hospital. As I was injured very badly, I was taken to the Military Hospital, Calcutta. I was in the hospital for three months. Because of the head injury, I was in a confused state of mind. After that, I was not fit to go to the front, so I retired from the army, and joined the civil service."

A few months later came VJ (Victory in Japan) day, and the horror that was World War II ground to a halt. "I felt relieved and thanked the Almighty when the war ended. Thousands and thousands of people lost their lives. I don't know how many dead bodies I saw. From my unit itself, we lost so many lives. When I heard the news that the war ended, I went to Tirupati to thank the Almighty. When I reached there, some of the people whom I knew saw me. They said, 'Oh we thought you were dead.' I said, 'No, I am very much alive!'"