The response to the US State Department's decision to rescind Gujarat Chief Minister Narendra Modi's tourist/business visa and deny him a diplomatic visa, thus effectively debarring him from entering America whose doors were flung open to welcome Sinn Fein's leader Gerry Adams the previous week, is enlightening.

Christian and Muslim organisations based in America and comprising Americans of Indian origin have been effusive in welcoming the US State Department's patent discourtesy and callous disregard towards India's sensitivities as a sovereign nation.

The Congress-led United Progressive Alliance government has set aside its political differences with the Bharatiya Janata Party. Apart from instructing the ministry of external affairs to summon the American ambassador to convey India's displeasure, Prime Minister Manmohan Singh has made a full statement in Parliament, unambiguously expressing the government's 'very deep concern and regret over the US decision to deny a visa to a constitutionally elected Chief Minister of a state of our Union.'

He has also put the issue in its proper perspective by stressing two facts: 'While we respect their (the USA's) sovereign right to grant or refuse visas to any person, we do not believe that it is appropriate to use allegations or anything less than due legal process to make a subjective judgement to question a constitutional authority in India.'

'Coalition Against Genocide,' floated by Indian Americans to block Mr Modi from entering the USA, can eat crow. So can United States Congressman Joe Pitts who has been going around bandying astonishing lies to defame Mr Modi.

It's an issue of swabhimaan: Modi

The USA is entirely within its rights not to grant a visa to any person anywhere in the world. It would be absurd to argue against this fundamental sovereign right of a nation. At the same time, it needs to be pointed out that by exercising this right while denying a visa to Mr Modi, the US administration has done precisely what it accuses its foes of: maligning America's democratically elected leaders by taking recourse to spit-and-run campaigns of calumny.

We have heard American presidents and their officials rudely rubbish citizens' reports and media exposes as unfair indictment of those who rule the USA. Just because American soldiers have murdered, raped and pillaged in My Lai, scorched people and their land in Vietnam with napalm, indulged in ghastly torture and denial of human dignity at Abu Ghreib; simply because CIA operatives have subverted democracy in Nicaragua, El Salvador and Guatemala; merely because the US State Department has propped up Augusto Pinochet in Chile, Fulgencio Batists in Cuba, Ferdinand Marcos in the Philippines and a succession of killer generals in Pakistan; and, only because US foreign policy has fathered monsters like Saddam Hussein and Osama bin Laden, the commander-in-chief of the US army, the president of the USA, cannot be held responsible. If you don't agree, do not apply for an American visa.

Perhaps the US State Department had not anticipated that political parties in India would close ranks and that the UPA government would take a firm stand against Washington's chicanery. It is entirely possible that analysts based at the American embassy in New Delhi were convinced that the Congress would cheer the decision to blackball Mr Modi and saw in their denial an excellent opportunity to score brownie points with the UPA regime. If so, then they got it horribly wrong.

In any event, the US administration's supercilious attitude has been exposed by its casual application of a dubious American law to justify its shockingly contemptuous action. It is not often that a note verbale from the ministry of external affairs of any country requesting a diplomatic visa, that too for an elected constitutional authority, is ignored. The US has done so with impunity. There is more.

The US State Department's claim that its decision to deny Mr Modi entry into America because he does 'not qualify for a visa under Section 212(a)(2)(G) of the US Immigration and Nationality Act which prohibits the admission to the United States of any foreign government official responsible for serious violations of religion freedom' hides more than it reveals.

The specific section of the Immigration and Nationality Act that has been cited says, 'Any alien who, while serving as a foreign government official, was responsible for or directly carried out, at any time during the preceding 24-month period, particularly severe violations of religious freedom, as defined in section 3 of the International Religious Freedom Act of 1998, and the spouse and children, if any, are inadmissible.'

Even if Mr Modi were to be guilty as charged by the US administration, American law does not debar him from securing a visa because more than 24 months have lapsed since the Godhra massacre and subsequent riots in Gujarat which occurred during the last days of February and early days of March 2002.

In any event, Mr Modi has neither been charged with nor found guilty of being 'responsible for or (having) directly carried out particularly severe violations of religious freedom'by any court of law in India. The Justices Nanavati-Shah Commission of Inquiry, an entity empowered by the Constitution of India, is yet to submit its report.

Confronted with a whiplash reaction from across the political spectrum in India, the US State Department has been left fumbling in its search for an articulate reason to justify its decision. It has flitted from clutching one straw to another.

The various attributed and non-attributed statements that have emanated from New Delhi and Washington suggest that the US State Department has taken cognisance of the National Human Rights Commission's report on the Gujarat riots, allegations levelled by certain foreign-funded NGOs, a hate-Modi campaign by some Indian American groups and a letter sent to Secretary of State Condoleezza Rice by Congressman Joe Pitts.

Reports of the NHRC are not legally binding; its reports on Pakistan's active involvement in promoting cross-border terrorism that violates the human rights of Indians have been ignored by the US State Department. Findings of NGOs are not beyond judicial scrutiny (one NGO has been found to have passed off printed pamphlets as 'signed affidavits' in the Supreme Court of India) and wild allegations by fringe groups and individuals with a perverse mentality based in America cannot be the substitute for truth.

For instance, one of the highlights of the 'Stop Modi' campaign in America is his alleged partiality towards Adolf Hitler and the Nazis. As evidence, stray sentences from a school textbook used in Gujarat have been cited.

The fact, on the other hand, is that the book was prepared, published and enlisted as a prescribed textbook between 1986 and 1992 when neither Mr Modi nor the BJP was anywhere near power in Gujarat which was then ruled by the Congress. Mr Modi, on becoming chief minister, had this particular textbook removed from the list of prescribed schoolbooks. Rather Goebbelsian, this particular dumb charade to discredit 'Hitler Modi.'

Similarly, anti-conversion laws are the gift of neither Mr Modi nor the BJP. Anti-conversions laws were adopted by Madhya Pradesh, followed by Orissa and Arunachal Pradesh, during the late 1960s and early 1970s after the Justice Neogi Commission found widespread rice bowl conversion by Christian evangelists luring poor people with promises of material benefit.

The initiator of that move was the Congress; Mrs Indira Gandhi, and rightly so, was of the firm view that stringent anti-conversion laws should be adopted by every state government to prevent forcible conversions or conversions by inducement. Gujarat's law merely replicates what has existed in other parts of India for more than three decades.

Whether or not Mr Modi was responsible for the horrific communal violence in Gujarat is yet to be determined by due legal process. (Congressman Pitt's letter makes no mention of the roasting alive of Hindus at Godhra, but that is only to be expected.) If mere allegations by 'citizens groups,' Amnesty International and Human Rights Watch were sufficient grounds to bar people from entering America, the 'Presidents', 'Kings', 'Princes' and 'Emirs' who preside over Middle East's criminal regimes would by now have been deprived of the pleasures of Las Vegas.

Nor would General Pervez Musharraf have been a welcome guest in Washington if the US administration had taken its freedom of religion report on Pakistan as seriously as it has taken the bunkum about religious freedom in India. General Musharraf is wholly responsible for the ethnic cleansing in the Kashmir valley that has led to the destruction of the Kashmiri Pandit community. The fact that President Bush is in the process of writing Pakistan's military ruler, whose khaki is stained with the blood of thousands of Hindus, including at the Akshardham temple, killed by Islamic terrorists sponsored by him, a cheque for $630 million, is comment enough on American duplicity. 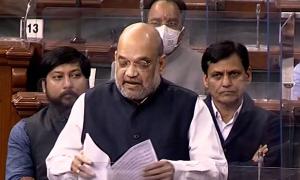 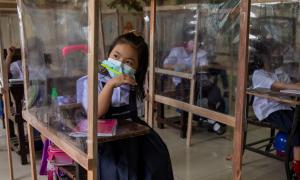