Sign in  |  Create a Rediffmail account
Rediff.com  » News » 'US has largely used force on behalf of Muslims in trouble'

'US has largely used force on behalf of Muslims in trouble' 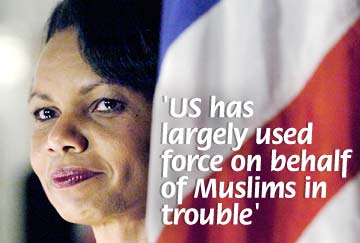 On her maiden trip to India and Pakistan, US Secretary of State Condoleezza Rice expressed America's pleasure at the peace process between the two countries and by not announcing the sale of F-16s to Pakistan, did not raise alarm bells in India. She also invited Indian Prime Minister Manmohan Singh to USA on her President's behalf and indicated that President George W Bush would make a trip to India in the not-so-distant future.

In an interview to Hamid Mir in Islamabad, the US secretary of state spoke of America's security concerns about the India-Iran gas pipeline, the hunt for Osama bin Laden and America's perception in the Muslim world.

You met Indian leaders in Delhi. Are you satisfied with the dialogue process going on between India and Pakistan?

It's a good thing that President Musharraf is going to some cricket match. Last night, he actually tried to explain cricket to me and I promised I was going to figure out what...

Tell us why is the US against the India-Iran gas pipeline?

Well, we've voiced our concerns to the Indian government about the gas pipeline with Iran. It's not only with India. We've similarly talked to Japan about a gas project that they would have because the United States has sanctions on Iran for good reasons. We have many differences with Iran about terrorism, about interference in their neighbour's affairs, about the fate of the Iranian people themselves. And so we've voiced our concerns.

But we also understand that this and other such projects are emblematic of the tremendous energy demands that are there in growing economies, like in India or the Pakistan economy, or for that matter, the growing economy of the United States and that the message that we are therefore carrying to everyone is that we all need to pool our thinking, our technologies, our ability to come up with reliable energy supplies...

Why is the US not selling F-16 planes to Pakistan?

And when will President Bush visit Pakistan and India?

Well, that's a good question. I know he very much wants to come. We hope that it won't be very long from now...

There is a perception here in some political circles that you are here to seek assistance from President Musharraf against Iran. So tell us what was the real objective of your visit?

Well, the objective of my visit was -- as in my first months as Secretary of State and in the first months of President Bush's second term -- to come here to our valuable ally and friend Pakistan to talk about what we're doing jointly together in the war on terrorism, but also to make the point to the government of Pakistan and to the Pakistani people that we consider this relationship to be broader and deeper than just what we are doing in the war on terrorism, as important as that is.

So we've had discussions on economic reforms, of the support that the United States is giving to educational reforms here. We hope to help Pakistan in any way that we can, as well as India, in continuing the warming of relations between India and Pakistan. So we've had very good discussions. We had discussions about Pakistan and Afghanistan, now both allies in the war on terrorism. So that's the course.

Well, we certainly discussed, as we are with all of our friends, the importance of a democratic path for Pakistan. We talked about the fact that the press is open and increasingly free here, that it's vibrant, and such an important step forward about the educational reforms. But of course, we fully expect there has to be a democratic path and that elections have to be held.

The President made a major point in his inaugural address that democracy -- the discussion of democracy would have to be an issue with every country in the world. And so that is also true here in Pakistan.

First of all, it was a very good thing for the world that the A Q Khan network is out of business and we are working with a number of governments around the world, most especially Pakistan, to make sure that that is indeed the case. We have good cooperation with Pakistan on this matter, good information sharing, and we are working with all who might have been involved because this is a very serious matter.

The thought of a black market entrepreneur trading in the world's most terrible weapons technology, really gives us cause to think that this is not just a state-to-state issue but that these networks need to be understood and broken up.

Do you want direct access to Dr A Q Khan for your investigators?

Well, we are working with the Pakistanis for reasonable arrangements to get what we need to work together in order to deal with this problem. It's important to realise that this isn't just of interest to the United States. It's, of course, of interest to Pakistan which wants to know what happened here. And so I'm confident that we can work together and arrangements can be made.

Well, I can't speak to the day to day of this, but we of course are working hard to find Osama bin Laden. There is a worldwide intelligence network and law enforcement network that is now tracking and pursuing Al Qaeda.

It is also true that it's important as it would be to get Osama bin Laden, as much as I look forward to the day that that phone call comes. It is the Al Qaeda network that is key here and we have succeeded in putting out of commission many of the Al Qaeda field generals, people like Khalid Sheikh Mohammed or Abu Zubaida.

We have also succeeded in constraining their financial resources and pull. And as I said, their world is getting smaller, it's harder for them to communicate, it's harder for them to operate, and that is a very important goal too.Recently, an Al Qaeda courier was captured and US intelligence officials revealed that he was carrying a message from bin Laden to Al Zarqawi in Iraq.

Does that mean that that bin Laden is still active and operating?

We're quite certain that he is still active, in some sense, but I don't think any of us know the degree of that activity; that Zarqawi would somehow link up with Al Qaeda and Osama bin Laden is not surprising. In fact, he had links earlier on to Al Qaeda and operated in Iraq even before the war. But Zarqawi is also now operating in a different environment. The Zarqawi network can cause spectacular damage and spectacular loss of life with the car bombings they carry out.

But they can't offer the Iraqi people a promising picture. Only the political process that really got a tremendous boost with the election back in January can offer the Iraqis a political future and Zarqawi did everything that he could to make sure that the Iraqi people would not vote. He threatened them. There were posters up that threatened them. But they voted anyway and that's a defeat for terrorism.

We found out that the United States needs to do a better job of explaining what it is that we are doing. And I would just make a couple of points: first of all, the United States in the last several times that it has used force, it has largely been on behalf of Muslims who were in trouble.

Whether it was in Kuwait, where we freed Kuwait of Saddam Hussein who had occupied the country. In the Balkans and Bosnia-Herzegovina and in Kosovo, where Muslim populations were being slaughtered by Serbs and by others. In Afghanistan because the Muslim population was freed of one of the worst regimes in the 20th century, the Taliban, which was brutal in its suppression of the people and particularly brutal in its treatment of women.

In Iraq, it has been the United States and the coalition that has given an opportunity to the Iraqi people to vote and to show that democracy can take hold in the center of the Arab world, something that has stimulated people in much of the Middle East to feel the winds of freedom. And of course, we have enormous respect for the great faith of Islam.

We have enormous respect for Muslim culture. I might point out that one of the fastest growing groups in the United States is the Muslim population, where American Muslims worship freely, where they hold their traditions, where they educate their children in their traditions.

And so, the greatest respect that the United States can have for the Muslim population is that we believe, like all other people in the world, they desire freedom and liberty and that they aspire to the human dignity that comes with freedom and liberty. We do not subscribe to the idea that somehow Muslims -- that the Muslim faith and democracy can't live in the same body. Of course, they can.

So I think that if we can simply have an opportunity to talk more about what America has meant for the Muslim population, such as has needed to be freed from brutal regimes, what -- how well Muslims do in the United States, and also that we believe strongly that there are going to be burgeoning, vibrant Muslim democracies.

I think you don't believe in the clash of civilisation too.

I absolutely do not believe in the clash of civilisations. We are all one civilisation and that's a human civilisation that I think aspires to the dignity that comes with freedom and liberty.