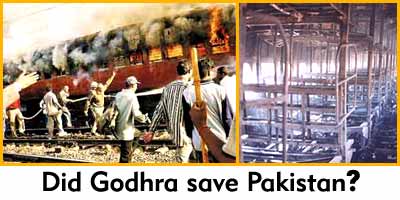 Part I :  We were ready to punish Pakistan

'Rumours of an attack on a temple spread like wildfire. Ahmedabad city was put under curfew. Yet the violence did not stop. The local police were accused of showing anti-Muslim bias and were ineffective. After two days of unsuccessful attempts at stopping the violence, the city of Ahmedabad was handed over to the army.'

'Two trains were stopped, Muslims were pulled out and killed. The rioting had spread to Mehsana, Surat, Anand and Jamnagar and Rajkot, the birth place of Mahatma Gandhi. Even the Sabarmati ashram, established by Mahatma Gandhi, was not spared and was attacked by a rampaging mob. It was only after 10 days that the situation was finally brought under control. It was estimated that over 1,500 people were killed while thousands left their homes in panic and sought refuge in temporary camps.'

'We had begun to get reports of scattered violence shortly after we had watched on television the barbaric video tape of motorists being ripped out of their cars, hammered, pounded and chased by rock-throwing men on the ground. The image of a man being pulled from his truck by thugs still burned in my mind. My memory was seared by the vivid imprint of the motionless, beaten man lying on the ground, being kicked and brutalised.

'I was still filled with rage at the sight of one of the assailants picking up a large piece of cinder-block and throwing it at his apparently lifeless body, smashing him in the head. Then, after the savage beating, the attacker appeared to do a dance, raise his hands towards the helicopter overhead and flashed a victory sign.'

'As our helicopter circled over the city, we could see that fires were breaking out over a widespread area. The dark plumes of smoke were ominously spreading to different spots of the city. Firemen could not respond to many of these early fires because snipers were shooting at them. Later police escorts went in with the fire fighters to protect them from the snipers.'

-- Los Angeles, early evening of April 29, 1992. The riots, provoked by a video clipping of police brutality, lasted over a week.

The Gujarat riots of 1969 were far more serious than the 2002 riots. The death toll, as a proportion of population was far higher and the violence had spread to many parts of the state.

What the synopsis of two events shows is:

The country was at that time on the brink of war with Pakistan. On the earlier two occasions, 1965 as well as 1971, remarkable internal peace had prevailed.

In 1971, despite the well known fact that the Pakistan army had killed close to 300,000, mainly Hindus, in Bangladesh (a figure accepted by the official Hamidur Rehman commission as well -- Pakistan General Gul Hasan who was chief of the army at the time claims that over 600,000 were killed), there was no internal strife as all parties (including the much reviled RSS) were co-opted in keeping this secret.

Ninety percent of the nearly 1 crore (10 million) refugees that poured into India were also Hindus. But even this was successfully hidden from the public.

The Godhra incident and the Gujarat riots were the first instance when internal conflict erupted even during an external threat.

There have been many claimants to credit for avoiding war in the subcontinent in 2002, the year when for ten long months the Indian armed forces were poised on the Indo-Pak border.

Colin Powell, then the American secretary of state, has gone on record to claim that it was the efforts and influence of the United States that averted war in the sub-continent.

If the US is so influential with the Indian government, one is tempted to ask, then why did it not succeed in preventing the nuclear tests at Pokhran in May 1998?

American multinationals who outsource their work to the Bangalore-based IT industry claimed it was their threat to withdraw which forced Indian companies like Infosys and Wipro to lobby with the government in favour of peace and restraint.

While there is some truth in these assertions, it is likely it was the Godhra incident and the riots that followed in March 2002 that really saved Pakistan from being attacked by India.

Godhra (and its twin city of Dahod) is famous in the subcontinent as the birthplace of Aurangzeb, the fanatical Mughal emperor. It is also a well known trouble spot that has seen violent riots between Hindus and Muslims for over a hundred years. A large number of people of Godhra have links with people in violence-prone Karachi in Pakistan.

On February 27, 2002, when the Sabarmati Express arrived at Godhra railway station early in the morning, it carried the usual load of Hindus returning from Ayodhya, a Hindu pilgrimage centre.

These pilgrims travel in large groups. They often act rowdily and altercations with vendors is a common occurrence. In fact, most vendors are known to shut shop when such trains approach.

No sooner had the train left the station, it was stopped by pulling the emergency chain, just a little distance away from the station. Here the train was surrounded by a mob of thousands that pelted stones at the passengers.

Apparently some people then entered bogie S-6, which had mainly women and children, by cutting the cloth partition between two bogies. They then poured petrol into the carriage and set it afire. 59 people, including women and children, were burnt alive.

The incident had all the hallmarks of a pre-planned attack. The movement of Hindu pilgrims by this train was a regular, routine affair, not a sudden provocation. Also, it is not easy to suddenly garner a mob of several thousand without warning. A fire engine that tried to reach the spot was denied access, indicating a certain degree of leadership and planning.

The question that remains is, why?

Gujarat then and now was ruled by a Hindu hardliner who faced a difficult election in a few months time. That he would make capital of this incident was a foregone conclusion.

But where was the army? Unlike the earlier occasions when the army stationed in Ahmedabad could move in at an hour's notice, this time it took more than two days. The troops earmarked for internal riot control duties were more than 600 km away, deployed on the border and ready for war.

To re-adjust the defences took time. The troops flown into Ahmedabad did not have transport and were unfamiliar with the geography of the city. It took them nearly three days to bring the situation under control.

Most of the killings and violence took place before the army was deployed. Sporadic arson and violence did continue, but the worst was over within a week.

In normal times, the army could have been deployed in a day.

For instance, army units in Delhi and Meerut (40 km away) were ready to move in within hours of the riots sparked off by the assassination of Indira Gandhi on December 31, 1984. But the then government deliberately delayed deploying it.

This was certainly not the case in 2002, when the delay was caused due to the logistical difficulties involved in redeploying troops from the border.

The brain behind the Godhra incident knew it would trigger riots, which in turn would force such a redeployment. In fact, an entire division (40,000 soldiers) had to be moved, while another division was kept on alert to move into other areas if necessary.

The effect on Operation Parakram

On an average, a division covers close to 50 to 75 km of border. The loss of close to two divisions obviously weakened the Indian threat of action against Pakistan.

'Indian forces were ready for raids into Pakistan'

Let us look at the sequence again.

It was only towards early May 2002 that the troops rejoined their comrades on the border. By then, the window of opportunity was shut, as the snows in Himalayas would melt, and a Chinese threat had to be factored into the planning.

On May 14, 2002, terrorists struck at Kaluchak in Jammu area. The gruesome attack targeted the wives and children of the soldiers. The sheer audacity of the act was to show to the world India's 'impotence'. The terrorists achieved their aim as thanks to the Gujarat riots, the army was not in a position to react.

In an interview to rediff.com, Major General Ashok Mehta (retd) said: 'Then Kaluchak happened in May and a new D-Day was selected- June 15. On US prodding, General Musharraf made his May 27 speech reaffirming compliance (of Indian demands of curbing terrorist activities).'

The cost of a war that wasn't

It seems clear that the attack on Parliament as well as the Kaluchak massacre were the handiwork of 'freelance' terrorists, nurtured by Pakistan but nor necessarily under its direct control. The aim of terrorists was very clear, provoke a war between India and Pakistan by hook or crook.

But the Godhra incident was a calculated act, organised and executed by Pakistan to save itself from an imminent Indian attack.

As an act sponsored by a State, with all its resources in forensic help, legal expertise and police inputs, it falls in the category of a perfect crime.

No enquiry commission will ever be able to trace the true culprits and solve the mystery of Godhra.

This analysis is based on military logic and understanding of a military mind and not on any insider information. To those who consider this presumptuous, I would cite just one example.

During the First Gulf War of 1991, there was intense speculation over how and from where the Americans launch their ground offensive.

I used to write a daily column for Loksatta during the first Gulf war.

Based on a simple map, knowledge of military history and reading of military mind, I had predicted a week before the actual event the exact pattern of attack.

The prediction was that the 82 and 101 Airborne Divisions would take Al Kurna and Al Nasariya with the Third Army launching an armoured thrust from the west to link up. The Americans would thus cut off the Republican Guard located to the east and south and be poised to drive into Baghdad should Saddam not surrender. I even published a map showing this plan.

In the event I was spot on.