Sign in  |  Create a Rediffmail account
Rediff.com  » News » 'It was the darkest period of Indian democracy, a blot'

'It was the darkest period of Indian democracy, a blot' 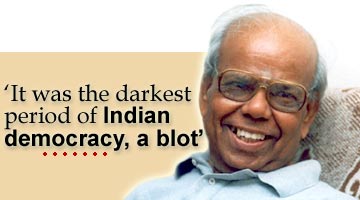 R V Chandramouli, a retired IAS officer, was Gujarat's home secretary when President Fakhruddin Ali Ahmed declared a state of Emergency in the country on June 25-26, 1975. Chandramouli recounts what life was like for civil servants during those 19 months when democracy was suspended and India was ruled by a virtual dictator.

The Emergency was declared on the intervening night of June 25-26, 1975. It so happened that I was not in Ahmedabad but in Bombay (later renamed Mumbai) for some personal work. When I reached Ahmedabad on the 26th morning, I expected only my driver at the railway station to pick me up, but I found quite a few constables and some senior police officials too. I thought riots had broken out in Ahmedabad. When they told me an Emergency had been imposed, I asked, 'What is this Emergency?'

I asked the question because there was no aggression by Pakistan or China. Then, they said, it is an internal Emergency.

My experience in Gujarat as home secretary can be divided into two parts -- the period when a popular government ruled the state, and the period after the Emergency was imposed. Babubhai Patel became chief minister following the 1975 assembly election. I was the chief election officer. It was a Janata Morcha government in which the Jan Sangh, the old Socialist Party and many others were constituents.

From the station that morning I drove straight to the chief minister's residence. He was a very decent man, one who never played games. He said we are opposed to the Emergency politically, but we have to implement the central government's valid orders. He told me you are free to implement it whenever you think a valid order has been passed by the central government. We will not embarrass you by giving a contradictory order.

That was the beginning.

The first thing the central government did was order the arrest of Morarji Desai, who became prime minister after the Emergency, Jayaprakash Narayan, Atal Bihari Vajpayee, L K Advani, etc. The biggest culprit in the eyes of Delhi in Gujarat was Babubhai Patel, but he happened to be the chief minister. The central government could not pass an order to arrest a chief minister.

As far as I can recollect, we did not arrest many people in Gujarat so long as the Babubhai Patel government was in place.

The central government had sent orders on censoring newspapers. We took the view that any criticism of the Emergency could not be considered to be a threat to the security of the State.

In north India, there was a blanket ban on public meetings. Haryana was under Bansilal then. They wanted us to pass a similar order in Gujarat too, banning public meetings. We said we couldn't do it.

At that time, a committed Gandhian, whose name I think was Chunnilal Vaidya, was running a weekly paper in which he wrote anti-Emergency articles. The central government wanted to stop him. We didn't agree. He continued printing the paper. Then, Delhi took action against him directly under the Printing Regulation Act or something like that. Ultimately, he had to shut the paper because Delhi threatened the press which printed it. Then, he started sending hand-written journals by post. Soon, the post office stopped collecting his mail.

Gradually, the central government's anger against the Gujarat government was mounting. Indira Gandhi was determined to see all non-Congress governments dismissed. In Tamil Nadu, then governor K K Shah was asked to make a report that then chief minister M Karunanidhi was corrupt. On the basis of that report, Karunanidhi was dismissed.

In case of Babubhai Patel, that could not be done. Governor K K Viswanathan, though a Congressman, was a very fair person. So they resorted to the time honoured method of getting Patel defeated by defections. Babubhai resigned and President's rule was imposed in the state.

I still remember Babubhai's greatness. The Delhi government used to send proposals to arrest an MLA who was known to be a smuggler. Once we found that there was evidence to arrest him under COFEPOSA (Conservation of Foreign Exchange and Prevention of Smuggling Activities Act). I signed it and sent it to the chief minister. At that time, the Rajya Sabha elections were due. Babubhai saw the papers and said: 'I know he will vote against my candidate, but I don't want to deprive him of his vote'. He then asked me to postpone the arrest by a day or two. I must say such a request was never expected from a political person.

I was removed from the home secretary's post in May 1976 and appointed to the education department. I knew it was coming, and it was such a relief for me because the conflict of conscience was too much. There are occasions you find you have to do things that are absolutely, one hundred per cent wrong. I knew that there was talk in Delhi that the Emergency was not properly enforced in Gujarat, which meant we hadn't put the opponents of the Emergency in jail. I told the person who succeeded me that the job required not application of mind, but application of pen.

The first thing the governor was forced to do was ban all meetings. Earlier, those who opposed the Emergency used to meet and air their views against its imposition. Now, that voice was stifled. Newspapers also became afraid to write against Delhi.

An interesting incident happened under President's rule. The director of the Intelligence Bureau issued a list of people to be detained. Of course, all those who were against the Emergency were arrested. A person who was with Babubhai earlier and had defected to the Congress also was in the list. I think the IB fellows didn't do their homework. So, the man who was against the Emergency earlier, but was supporting it now landed in jail. It was a funny situation.

By December 1976, it was clear that Mrs Gandhi would call elections soon.

Two, wherever there was compulsory sterilisation, the Congress lost heavily.

It was the darkest period of Indian democracy, a blot. It was shameless use of power. The good thing that came out of the Emergency was the fact that Indian voters may be illiterate, but they know the value of putting the ballot paper into the ballot box. Today, I think no government can tamper with our democracy. Even the poorest man, even the most illiterate, the unlettered Adivasi knows that he has the most valuable right with him to teach a lesson to the politicians, at least for five years!