'Kaniskha verdict did not shock me' 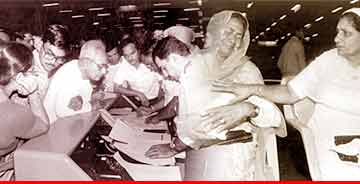 Former joint director of the Intelligence Bureau Maloy Krishna Dhar was a counsellor at the Indian high commission in Ottawa, Canada, from October 1983 to July 1987.

In his recent memoir of life in India's intelligence services, Open Secrets, India's Intelligence Unveiled, Dhar recalls: 'I received a call from a London-based friend at about 04.45 (Canadian) on 23.6.85 asking me if I had heard about the BBC broadcast about the A-I 182 crash. I jumped out of the bed, tuned in the television and radio and gathered sketchy information about the disappearance of the flight from the Heathrow radar.'

In an interview with Senior Editor Ramananda Sengupta to mark the 20th anniversary of the Kanishka disaster, Dhar says while lack of coordination between Canadian intelligence agencies probably led to the acquittal of the two main accused in the case, a public inquiry 'may only prolong the scars of the victims' families.'

What was your first reaction upon hearing about the acquittal of Ripudaman Singh Malik and Ajaib Singh Bagri, who were accused of involvement in the Kanishka bombing?

I was pained by the

court decision as I shared the pain of hundreds of Canadian and Indian families.

I was not shocked, because conviction in a court of law depends on quality of evidence, evaluation system of evidence in a particular country and commitment to the issue. Evidences were not strong enough.

According to your book, the arrest of Bagri and Malik 15 years after the bombing was partly due to your visit to Canada in June 2000. What specific inputs did you provide them so long after the event, leading to the arrests?

Chronologically it is correct that Malik's and Bagri's arrest followed my private visit to Canada, but it cannot be said that inputs from me alone had prompted the Canadian authorities to arrest the duo.

I had only supplemented what I knew in personal capacity about Babbar Khalsa International and the overall activities of Malik and Bagri as collaborators of (Babbar Khalsa leader) Talwinder Singh Parmar and their roles in planning, financing and motivating Babbar Khalsa activists to carry out the dual blasts over the Atlantic and at Narita airport.

It is pertinent to note that the State Bank of India, Vancouver, had given Malik a fat loan sometime before the blast for business purposes.

The SBI had not taken any clearance either from the CGI (consul general of India), Vancouver or HCI (high commissioner of India), Ottawa. Malik had diverted some of his business assets for promoting Babbar Khalsa activities. This aspect has not been probed.

'Govt too demoralised to appeal'

Many believe the acquittal was due to the sloppy handling and bungling of the case by the Canadian Security Intelligence Service and the Royal Canadian Mounted Police, who often worked at cross purposes and did not share information. Do you agree?

I tend to agree that the RCMP was acting on scanty evidence, they could not connect Malik and Bagri with the experimental detonations that were carried out in the outskirts of Vancouver before the plane downing, they could not be connected with financing though there were evidences that the baggage for the AI flight and JAL (Japan Airlines) flight were handled by someone associated with Malik.

Someone whose steps could be traced to the doors of Malik also booked tickets. I agree there was communication and reliability gaps between the CSIS and RCMP.

The Canadian media had (has) profusely commented upon links between the CSIS and a theorist of the Babbar Khalsa, a Sikh of Malaysian origin. He was suspected for being involved till the last phase of the Kanishka operation. He suddenly disappeared before the incident and is believed to be in the UK now. He was not interrogated and called to the witness box.

The RCMP was not the beneficiary of intelligence generated by the CSIS, probably on the basis of its association with S S Gill.

The Indian high commission was aware of Gill's connectivity with the Canadian agency, as this was even commented upon privately by the Indian community of Sikh faith.

It was something like the gap that occurred before the 9/11 incidents.

'Unfortunate end to a disastrous beginning'

In retrospect, is there anything India and its intelligence agencies could have done, directly or indirectly, to help indict the two main accused?

I am not able to speak on behalf of the Indian intelligence agencies.

I was holding a post borne on the Bureau of Security of the MEA (ministry of external affairs).

In that capacity I had, with the permission of the HCI (high commissioner of India), sensitised the nodal security points in the RCMP and MEA Canada, that according to our information some Babbar Khalsa activists were trying to tap an aviation expert located at Thunder Bay, Ontario, on the mechanics of flying small and jet aircrafts.

The gentleman had warned me about three points: terrorists may use a small craft from Safdarjung airport to crash it on the residence of the PM, may use a truck mounted mortar to bombard the PM's residence and the Babbar Khalsa is planning some spectacular action against Indian, specially aviation targets.

The first two (bits of) information were shared with Delhi and it is presumed they had sealed the airport and had taken other measures. The third point was shared with the nodal security points in Canada.

I am not aware what inputs were received by the RCMP from the CBI (Central Bureau of Investigation), R&AW (Research and Analysis Wing) and IB, as I have no link anymore to these agencies.

Do you support the growing demands for a public inquiry into the tragedy, despite knowing that neither of the two accused can be charged again for the same crimes?

I do not think a public enquiry will serve any purpose.

It may only prolong the scars of the victims' families. It requires examination to opine if the situation merits demanding compensation to the victims' families from the Canadian government and Air-India for negligence in security protocol. That could finally apply a soothing balm.

'We wanted the accused to be hanged'

Do you believe the Canadian government was less than enthusiastic about the investigation, and treated it as a Indian rather than a Canadian tragedy?

I am of the opinion that till Indira Gandhi was assassinated and the Kanishka blast had taken place the Canadian attitude towards the Sikh terrorist problem was one queer mix of human rights concern and minor irritation over the law and order problem in Canadian provinces.

They took the matter seriously after the Kanishka blast.

Till that time, they were suffering from the same syndrome as the US was suffering about Pakistani actions in Afghanistan, Kashmir and Punjab. Only 9/11 has made them wiser about terrorist threats.

Having described the psychological attitude I can say they did not show any bias against the victims' families, who were mostly Canadian citizens of Indian/Asian origin. It was both an Indian and Canadian problem, but Canada initially perceived it as a problem related to one small segment of the multicultural community, not as a serious threat to Canada and India.

How did the fact that the R&AW set-up in Canada was declared persona non grata during your tenure impact the investigations into the Kanishka bombing?

I am unable to comment on this. I have no idea about the functioning of that organisation.

Is the separatist movement in Punjab still alive?

From my experience in Punjab, the Babbar Khalsa is still active and has caused two blasts in Delhi and certain arrests have been made.

Pakistan is sheltering Babbar Khalsa stalwarts in ISI safe houses in Lahore. They are active in Canada, Germany and UK etc.

My view and assessment are that in case Pakistan eases in Kashmir it will escalate in Punjab and the North East. The Akali Dal and BJP governments have quietly allowed Wassan Singh Jaffarwal (commander, Khalistan Commando Force) and Dr Sohan Singh (the mukhia of the Panthic Committee) to return from Pakistan and settle down even without exhaustive interrogation, leave alone prosecution. Sohan Singh has a family relationship with the late Sardar Swaran Singh, a former Union minister. Therefore, I cannot say what maverick Indian politicians will do.