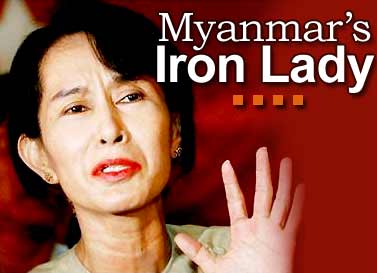 This is no spaghetti western. This is a real story from Danubyu, Myanmar.

April 5, 1989, two months before the Tiananmen Square massacre in nearby China.

A woman walks down the middle of the street, accompanied by several men. Six soldiers of the State Law and Order Restoration Council -- the junta which had crushed the democracy movement and killed thousands of people in Rangoon a few months earlier -- order the group to stop.

The group pays no heed. A young army captain whips out his revolver and jumps out of his jeep, ready to open fire.

The woman asks the men to move aside: 'It seemed so much simpler to provide them with a single target than to bring everyone else in.'

In the nick of time, a major intervenes, and asks the captain to hold his fire. The lady walks on.

She is Daw Aung San Suu Kyi, the Iron Lady of Burma.

The fearless daughter of General Aung San, the hero of Burma's freedom struggle, turned 60 June 19, thereby completing a full cycle according to the Buddhists who follow the 5 elements and 12 animals calendar.

For the past 16 years, Suu Kyi has only seen the inside of the jails, been under house arrest or forbidden to freely travel in her own country. But she has always remained faithful to her principles: a non-violent championship of democracy.

At a time when role models are a rarity, Suu Kyi is one of the very few persons on this planet whose life can be an inspiration; she is the embodiment of a rare value in this often immoral world: the freedom of the spirit.

Is it a coincidence that another Nobel Laureate, who like her has become a role model for the youth, has also written about 'freedom'? Freedom In Exile is what the autobiography of Tenzin Gyaltso, the Dalai Lama of Tibet, is titled. Suu Kyi collected writings are: Freedom from Fear.

There are many similarities between the Tibetan leader and Burmese freedom fighter: it is probably why he likes to refer to her as 'my little sister.'

For decades, the countrymen of both these exceptional beings have not known the taste of 'outer freedom'.

Next month, the Dalai Lama will?celebrate?his 70th birthday with 46 years of just 'inner freedom.' The 'little sister' completes 16 years of a similar fate.

Another thing Suu Kyi and the Dalai Lama share is their long association with India, an India which has rarely shown any sympathy for their political cause despite the great principles that its leaders swear on.

Aung San Suu Kyi was born June 19, 1945 in Rangoon to General Aung San and Daw Khin. The general was one of the 'Thirty Comrades' who spearheaded the Japanese advance into British Burma, before turning against the Japanese and finally negotiating Burma's independence with the British.

Just as he was taking over as the first head of the Burmese State, General Aung San was assassinated. It was the first national tragedy.

The same day in statement to the press, India Prime Minister Jawaharlal Nehru declared: 'I mourn Aung San, friend and comrade, who even in his youth had become the architect of Burmese freedom. I mourn Burma bereft at this critical moment of her chosen leaders and I mourn for Asia who has lost one of her bravest and most far-seeing sons.'

Suu Kyi was only two years old, but this event marked her deeply for the rest of her life. It is as if she had a debt towards her nation and an obligation towards her father.

'Her circle of Indian friends widened. This was a wonderful opportunity to explore and understand the country of Mahatma Gandhi,' recalls a family friend and diplomat, Ma Than E.

But her favorite pastime was reading books, in English and Burmese. Ma Than E says: 'India for Suu was a throbbing, vital experience. Her bonds of remembrance and love for this country have remained strong to this day [this was written in 1991].'

With her mother leading the hectic social life of a diplomat, Suu got to know many senior Indian politicians, officials and diplomats in the capital: 'She took a great interest in their appearance, behaviour, talk and idiosyncrasies.'

In 1964, Suu went to Oxford where she studied for three years to earn a BA in philosophy, politics and economics. Later she got her first work experience as an assistant secretary in the United Nations Secretariat.

Her life took another turn when she met a young and brilliant British scholar, Dr Michael Aris, whose expertise was the Tibetan Buddhist tradition.

Before her marriage Suu Kyi asked her future husband for a 'favour': 'I only ask one thing, that, should my people need me, you would help me to do my duty by them.'

Her life as a mother of two sons and a scholar continued smoothly during the following years. She was separated for some time from her family when in 1985, she decided to learn Japanese and work as a visiting scholar at the Center for Southeast Asian Studies in Kyoto University.

In 1987, the family was reunited and she was back in India. For two years, Dr Aris conducted a research on 'A Study of Buddhist Hagiography' at the Indian Institute of Advanced Studies in Simla.

The main theme of his study was the life and times of the Sixth Dalai Lama, born during the 17th century in Tawang district of Arunachal. Suu had herself received a scholarship to work on 'The Growth and Development of Burmese and Indian Intellectual Traditions under Colonialism.'

It was an excellent occasion for her to master the political and spiritual thoughts of Swami Vivekananda, Sri Aurobindo, Tagore, Gandhi or Radhakrishnan.

In her thesis, she admired these men who 'were able to use the English language to make their views known to the world. Because they could handle the western intellectual idiom so masterfully, the world regarded those views as worthy of serious consideration.'

After traveling extensively through the Himalayas and writing on India's age-old traditions of peace and tolerance, the couple returned to London in early 1988.

'Would you mind very much should such a situation ever arise? How probable it is I do not know, but the possibility is there?' Suu had once written to Michael.

Fate caught up with her in March 1988. Her mother had a stroke in Burma and Suu had to immediately leave England for her country.

Soon millions of Burmese joined in their demand for a true democracy.

This culminated on August 8, when thousands of demonstrators were massacred by the army, perhaps a prequel to the Tiananmen Square incident which happened less than a year later.

The time of reckoning had come for Suu Kyi.

'Her knowledge of the Burmese heritage, her wonderful fluency in her own language, and very important, her refusal to give up her own Burmese citizenship and passport? all these factors conspired with the sad circumstances of her mother's final illness to make her engagement unavoidable,' her husband later wrote.

On August 26, 1988, she addressed one million people assembled at the Shwedagon Pagoda in Rangoon.

'I could not, as my father's daughter, remain indifferent to all that was going on. This national crisis could, in fact, be called the second struggle for national independence.'

She thus became the leader of the opposition National League for Democracy?which till today opposes the military junta.

The following months saw her criss-crossing Burma and addressing hundreds of meetings; the incident reported at the beginning occurred at this time.

The junta was becoming more and more nervous and finally on July 20, 1989, she was arrested. On the eve, she had cancelled a mammoth rally on the occasion of the Martyr's Day (which marks General Aung San's assassination), as the army had threatened to shoot at the crowd.

From that day onwards she has spent most of her time in jail or in confinement ('protective custody' as the junta nicely calls it).

In May 1990, despite her continued detention, her party won a landslide victory in the general election; the NLD secured 82 percent of the seats. But till today the generals have refused to validate the results of the election.

In 1991 she was awarded the Nobel Peace Prize, but her fortune did not improve.

During the following years, despite appeals from the US president, the UN secretary general, the Dalai Lama, other Nobel Laureates and thousands of other personalities from the West and Asia, nothing has moved the junta.

The most tragic event is perhaps the death of her husband in March 1999.

Though she had not seen him since 1995 and he was dying from prostate cancer, he was refused a visa and not allowed to visit her a last time.

Suu Kyi could have left Myanmar to see him, but it was clear that the junta would not have allowed her to return.

Forced to choose between her husband and her country, she opted for the latter.

What has given the junta the strength to resist world pressure and keep Aung San Suu Kyi behind the bars of her home for 16 years?

Look to the North; it is the same regime which forced the Dalai Lama to flee his country in 1959. In China, the Communist/capitalist regime (which smashed its own children in 1989 in Tiananmen) is terrified of the word Suu Kyi lives by: Freedom.

There is no doubt that without Beijing's active support (and with India's failure to take a stand in accordance with her professed principles), Burma would today be a democracy.

'Always one to practice what he preached, Aung San himself constantly demonstrated courage -- not just the physical sort by the kind that enabled him to speak the truth, to stand by his word, to accept criticism, to admit his faults, to correct his mistakes, to respect the opposition, to parley with the enemy,' says Suu Kyi about her father.

She has practiced all these values and above all that of Abhaya, 'fearlessness', that 'gift of Ancient India' which is 'not merely bodily courage but an absence of fear from the mind.'

Whether or not she lives to see her dream materialise, Suu Kyu will live on forever in the minds of those who champion freedom of the spirit.