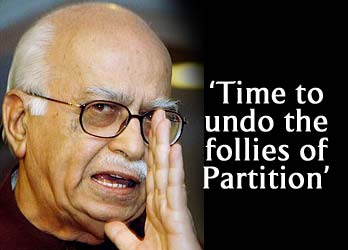 Speaking at a function organised by the the Karachi Council on Foreign Relations, Economic Affairs and Law on June 5, Advani had quoted from a speech by Jinnah to stress the fact that he believed in personal and religious freedom.

This is the full text of the speech:

It is always a matter of pleasure when one goes abroad and gets an opportunity to interact with the intellectual elite of that country.

But when the country one is visiting is Pakistan, and when the interaction with intellectuals is happening in a city which is one's birthplace, how can that experience be described? 'Pleasure'? 'Great pleasure'? 'Delight'?

I find these words trite on this occasion. The truth is that, I have no words to adequately capture the feelings that have welled up in me at this meeting in Karachi, which I have been able to visit only for the second time since I left it nearly six decades ago.

Karachi has changed beyond recognition, not only since I left in 1947, but also since I last came here in 1978. The city has of course become immensely more populous -- its population in 1947 was a mere 4 lakh; today, I am told, it is nearly 1.4 crore. But Karachi has also become more developed and prosperous.

I compliment the people of Karachi for this achievement and hope that not only Karachi but the whole of Pakistan continues to travel rapidly on the path to prosperity and all-round development.

My return to the roots

Friends, my visit had three parts. The first part, comprising two days in Islamabad, was largely political. The second leg, which meant two days in Lahore, was part political and part religious-cultural, since it included visits to the ancient Katas Raj Temples and to the Nankana Sahib Gurdwara.

But the last part in Karachi, again of two days, is purely sentimental. Before leaving for Pakistan, I had stated that the primary aim of my visit was to contribute, in my own humble way, to the ongoing peace process between India and Pakistan through my meetings with the leadership of Pakistan and also with representatives of various political parties and civil society organizations in this country. But I had added that the visit is also a kind of "return-to-the-roots" for me and members of my family, who are coming to Pakistan for the first time.

My visit to the school where I studied, to the house where I lived (although it does not now stand in its original shape), to the Sindh Assembly building where I met legislators belonging to the Pakistan People's Party (PPP), the reception and cultural programme organized by the Hindu Panchayat, and the lunch reception hosted by the chief minister of Sindh -- all these will remain indelible memories in me.

I have many deeply engraved memories of the first 20 years of my life that I lived in Karachi. I shall recall here only one of them, because the person with who that memory is associated, and the philosophy that I learnt from him in Karachi, have a reverential place in my life.

In the last three to four years of my life in Karachi, I came in contact with Swami Ranganathananda, who was the head of the Ramakrishna Math here for six years from 1942 until it was closed down in 1948.

I used to go to listen to his discourses on the Bhagavad Gita. In later years, I maintained regular contact with this great disciple of Swami Vivekananda, who went on to become the head of the Ramakrishna Math and Mission in India.

Swami Ranganathananda passed away in April this year. The last time I met him was in Kolkata last year. He was 96 but still very agile in mind and radiant in spirit. Our talk, among other things, turned to his years and my years in Karachi. He asked me, 'Have you read Mohammed Ali Jinnah's speech in Pakistan's Constituent Assembly on August 11, 1947? It is a classic exposition of a Secular State, one which guarantees every citizen's freedom to practice his or her religion but the State shall not discriminate between one citizen and another on the basis of religion.'

He asked me to send him the full text of the speech, which I did.

Full coverage: the crisis in the BJP

The reason for my recounting Jinnah's historic speech in the Constituent Assembly is two-fold. Firstly, as I said, it is associated with my last conversation with the Swamiji, who was one of the towering spiritual personalities in India. The second reason is that its remembrance was triggered by my visit to the ancient Katas Raj Temples in Chakwal district four days ago. The Government of Pakistan was kind enough to invite me to lay the foundation stone for a project to restore these temples, which are now in ruins but whose legend is rooted in the epic story of the Mahabharata.

I feel it appropriate to read out the relevant portion from Jinnah's speech.

'Now, if we want to make this great State of Pakistan happy and prosperous we should wholly and solely concentrate on the wellbeing of the people, and specially of the masses and the poor. If you will work in cooperation, forgetting the past, burying the hatchet, you are bound to succeed. If you change your past and work in a spirit that every one of you, no matter to what community he belongs, no matter what relations he had with you in the past, no matter what is his colour, caste or creed, is first, second and last a citizen of this state with equal rights, privileges and obligations, there will be no end to the progress you will make.

'I cannot overemphasise it too much. We shall begin to work in that spirit and in course of time all these angularities of the majority and minority communities, the Hindu community and Muslim community, will vanish. Indeed, if you ask me, this has been the biggest hindrance in the way of India to attain its freedom and independence and but for this we would have been free people long ago.

Therefore, we must learn a lesson from this. You are free, you are free to go to your temples. You are free to go to your mosques or to any other places of worship in this State of Pakistan. You may belong to any religion or caste or creed; that has nothing to do with the business of the State.You will find that in course of time Hindus will cease to be Hindus and Muslims would cease to be Muslims, not in the religious sense, because that is the personal faith of each individual, but in the political sense as citizens of the State.'

What has been stated in this speech -- namely, equality of all citizens in the eyes of the State and freedom of faith for all citizens -- is what we in India call a Secular or a Non-Theocratic State.

There is no place for bigotry, hatred, intolerance and discrimination in the name of religion in such a State. And there can certainly be no place, much less State protection, for religious extremism and terrorism in such a State.

I believe this is the ideal that India, Pakistan as well as Bangladesh -- the three present-day sovereign and separate constituents of the undivided India of the past, sharing a common civilisational heritage -- should follow.

I hope that this ideal is implemented in its letter and spirit. The restoration of the Katas Raj Temples is a good beginning.

Esteemed friends from Karachi, people often ask me: 'Does this mean that you want to undo the Partition?'

My answer is: 'The Partition cannot be undone, because, as I said in Lahore at the SAFMA function, the creation of India and Pakistan as two separate and sovereign nations is an unalterable reality of history. However, some of the follies of Partition can be undone, and they must be undone.'

Next: 'The imperatives of waging peace' 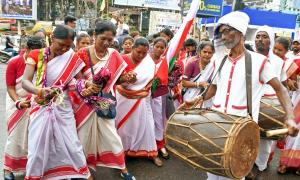