When a leopard nearly escaped...

Even as Mumbai was witness to its worst-ever rainfall in a century, the Sanjay Gandhi National Park in Borivali was seized with a new terror: the possibility of a leopard straying to freedom. 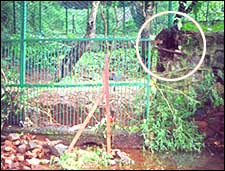 A swell of water broke open (see encircled portion in the photograph) a part of the green-painted iron enclosure that cages Rahul, leaving enough space for the 12-year-old leopard to escape.

Rahul, however, did not realise nature's fury had thrown open an opportunity. Clambering up a tamarind tree, he was waiting for the water to recede from his 400 sq ft enclosure.

Luckily, a guard patrolling the area spotted the damage and quickly rushed to get Rahul. He could not find the leopard in the cage and was frightened at the thought that he might have escaped. Then, the guard found Rahul on the tree.

Sakka, who works in the park, says, "Thankfully, it was not the fence of the cage housing the man-eaters that broke. If their cage had broken, they would have killed many in the vicinity (The man-eaters have already killed many people, including children)."

With a little cajoling, the friendly leopard was moved inside a small cement enclosure at the corner of his cage, beneath the rail tracks of the toy train.

Rahul's cage is just two kilometres from the main gate of the park; the gate opens into the busy Borivili-Ahmedabad highway. He could easily have strayed out, scaring and even killing people already stricken by the flood waters.

While the two deadly man-eaters snarl at each other in the adjoining shelter, Rahul sits quietly in a corner of his temporary home.

Missing Rahul is peanut vendor Sheela, who sits outside his cage.

"You can't see Rahul today," she tells visitors. "He will be inside the small cement room until the outer enclosure is repaired. He is so friendly that he takes food from your hand."

A former director of the park found Rahul, who was abandoned as a cub. Two years at the director's home tamed the leopard so much that the park's staffers have fond memories of him.

After the director retired, the authorities had no option but to cage him as an attraction to the hundreds of visitors who visit the park. "Once, the man who fed him mutton forgot to close the enclosure and walked away. After a while, he realised Rahul was following him. He asked Rahul to accompany him back to the shelter and the leopard obeyed!" says Sakka.

"Fortunately, the animals are all safe. We are able to reach supplies of food to all the cages," says P N Munde, director, Sanjay Gandhi National Park.

For the people who have braved the weather to visit the National Park, Rahul's absence is a big loss. Says Vidya, a nature lover from Mulund, a Mumbai suburb, "I had heard about Rahul from a friend. Since today was a holiday, I wanted to visit the park and see him. I don't mind coming back again."

Photograph: Manu A B

Manu A B
SHARE THIS STORY
Print this article