'India's experience with Britain had benefits too' 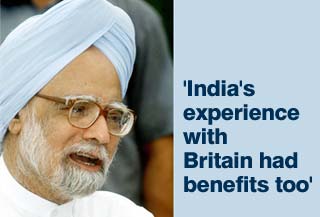 I must at the outset express my deep sense of shock and anger at the terrorist attacks in London.

I arrived here in the United Kingdom after dealing with the aftermath of yet another terrorist attack in India. It is clear once again that terrorism is a global threat. Terrorism anywhere is a threat to peace, freedom, human dignity and civilization every where. Terrorism is cowardice aimed at the innocent people . It is fed on hatred and cynicism.

Every time terrorists strike anywhere all of us who believe in democracy and the rule of law must stand together and affirm our firm commitment to fight this scourge resolutely and unitedly. I sincerely hope that all of those who cherish and value open and free societies will join hands in the war against terrorism wherever it is fought. I wish the people of London well. I pray that their lives will soon return to normal and they can resume their celebrations for having been chosen the venue for the 2012 Olympics.

This is an emotional moment for me. Oxford brings back many fond memories that I cherish. For this reason, as much as for the intrinsic value of the honour you bestow upon me, I am truly overwhelmed. I am grateful to you, Mr Chancellor, and to your colleagues, for this honour.

I have had the good fortune of receiving several honorary degrees. However, there can be nothing more valuable than receiving an honorary degree from one's own alma mater. To be so honoured by a university where one has burnt the proverbial midnight oil to earn a regular degree, is a most fulfilling experience. I thank you for it. This is a day I will truly cherish.

The world has changed beyond recognition since I was a student here. Yet, some age-old problems endure. Developing countries have found a new voice, a new status and have acquired a new sense of confidence over the last few decades. As an Indian, I see a renewed sense of hope and purpose.

This new optimism gives us Indians a sense of self-confidence and this shapes our world view today. It would be no exaggeration to suggest that the success of hundreds of young Indian students and professionals in Universities like Oxford, and elsewhere across the world, has contributed to this renewed self-confidence of a new India.

The economics we learnt at Oxford in the 1950s was also marked by optimism about the economic prospects for the post-War and post-colonial world. But in the 1960s and 1970s, much of the focus of development economics shifted to concerns about the limits to growth. There was considerable doubt about the benefits of international trade for developing countries.

I must confess that when I returned home to India, I was struck by the deep distrust of the world displayed by many of my countrymen. We were influenced by the legacy of our immediate past. Not just by the perceived negative consequences of British imperial rule, but also by the sense that we were left out in the cold by the Cold War.

There is no doubt that our grievance against the British Empire had a sound basis. As the painstaking statistical work of the Cambridge historian Angus Maddison has shown, India's share of world income collapsed from 22.6 per cent in 1700, almost equal to Europe's share of 23.3 per cent at that time, to as low as 3.8 per cent in 1952.

Indeed, at the beginning of the 20th Century, "the brightest jewel in the British Crown" was the poorest country in the world in terms of per capita income. However, what is significant about the Indo-British relationship is the fact that despite the economic impact of colonial rule, the relationship between individual Indians and Britons, even at the time of our Independence, was relaxed and, I may even say, benign.

This was best exemplified by the exchange that Mahatma Gandhi had here at Oxford in 1931 when he met members of the Raleigh Club and the Indian Majlis. The Mahatma was in England then for the Round Table Conference and during its recess, he spent two weekends at the home of AD Lindsay, the Master of Balliol.

At this meeting, the Mahatma was asked: 'How far would you cut India off from the Empire?' His reply was precise  'From the Empire, entirely; from the British nation not at all, if I want India to gain and not to grieve.' He added, 'The British Empire is an Empire only because of India. The Emperorship must go and I should love to be an equal partner with Britain, sharing her joys and sorrows. But it must be a partnership on equal terms.'

This remarkable statement by the Mahatma has defined the basis of our relationship with Britain.

Jawaharlal Nehru echoed this sentiment when he urged the Indian Constituent Assembly in 1949 to vote in favour of India's membership of the Commonwealth. Nehru set the tone for independent India's relations with its former master when he intervened in the Constituent Assembly's debate on India joining the Commonwealth and said: 'I wanted the world to see that India did not lack faith in herself, and that India was prepared to co-operate even with those with whom she had been fighting in the past provided the basis of the co-operation today was honourable, that it was a free basis, a basis which would lead to the good not only of ourselves, but of the world also. That is to say, we would not deny that co-operation simply because in the past we had fought and thus carry on the trail of our past karma along with us. We have to wash out the past with all its evil.'

India and Britain set an example to the rest of the world in the way they sought to relate to each other, thanks to the wisdom and foresight of Mahatma Gandhi and Jawaharlal Nehru. When I became the Finance Minister of India in 1991, our Government launched the Indo-British Partnership Initiative. Our relationship had by then evolved to a stage where we had come to regard each other as partners. Today, there is no doubt in my mind that Britain and India are indeed partners and have much in common in their approach to a wide range of global issues.

What impelled the Mahatma to take such a positive view of Britain and the British people even as he challenged the Empire and colonial rule?

It was, undoubtedly, his recognition of the elements of fair play that characterised so much of the ways of the British in India. Consider the fact that an important slogan of India's struggle for freedom was that 'Self Government is more precious than Good Government'.

That, of course, is the essence of democracy. But the slogan suggests that even at the height of our campaign for freedom from colonial rule, we did not entirely reject the British claim to good governance. We merely asserted our natural right to self-governance.

Today, with the balance and perspective offered by the passage of time and the benefit of hindsight, it is possible for an Indian Prime Minister to assert that India's experience with Britain had its beneficial consequences too. Our notions of the rule of law, of a Constitutional government, of a free press, of a professional civil service, of modern universities and research laboratories have all been fashioned in the crucible where an age old civilisation met the dominant Empire of the day.

These are all elements which we still value and cherish. Our judiciary, our legal system, our bureaucracy and our police are all great institutions, derived from British-Indian administration and they have served the country well.

The idea of India as enshrined in our Constitution, with its emphasis on the principles of secularism, democracy, the rule of law and, above all, the equality of all human beings irrespective of caste, community, language or ethnicity, has deep roots in India's ancient civilisation.

However, it is undeniable that the founding fathers of our republic were also greatly influenced by the ideas associated with the age of enlightenment in Europe.

Our Constitution remains a testimony to the enduring interplay between what is essentially Indian and what is very British in our intellectual heritage.

The idea of India as an inclusive and plural society, draws on both these traditions. The success of our experiment of building a democracy within the framework of a multi-cultural, multi-ethnic, multi-lingual and multi-religious society will encourage all societies to walk the path we have trodden. In this journey, both Britain and India have learnt from each other and have much to teach the world. This is perhaps the most enduring aspect of the Indo-British encounter.

It used to be said that the sun never sets on the British Empire. I am afraid we were partly responsible for sending that adage out of fashion!

But, if there is one phenomenon on which the sun cannot set, it is the world of the English speaking people, in which the people of Indian origin are the single largest component.

Of all the legacies of the Raj, none is more important than the English language and the modern school system. That is, if you leave out cricket!

Of course, people here may not recognise the language we speak, but let me assure you that it is English! In indigenising English, as so many people have done in so many nations across the world, we have made the language our own. Our choice of prepositions may not always be the Queen's English; we might occasionally split the infinitive; and we may drop an article here and add an extra one there.

I am sure everyone will agree, however, that English has been enriched by Indian creativity as well and we have given you R K Narayan and Salman Rushdie. Today, English in India is seen as just another Indian language.

No Indian has paid a more poetic and generous tribute to Britain for this inheritance than Gurudev Rabindranath Tagore. In the opening lines of his Gitanjali, Gurudev says:

"The West has today opened its door.

There are treasures for us to take.

We will take and we will also give,

From the open shores of India's immense humanity."

The challenge before us today is to see how we can take this mutually beneficial relationship forward in an increasingly inter-dependent world.

I recall with pride the fact that the Spalding professorship was held by two very distinguished Indians: Dr S Radhakrishnan, who later became the President of India, and by Dr Bimal Krishna Matilal.

In the context of the study and preservation of Indian culture, I also wish to recall the contribution of another Oxonian, Lord Curzon, about whose project to preserve and restore Indian monuments, Jawaharlal Nehru said, "After every other Viceroy has been forgotten, Curzon will be remembered because he restored all that was beautiful in India."

Many of those who were to rule India set course form Oxford. Some stayed behind to become India's friends. Men like Edward Thompson, Verrier Elwin and many others are remembered in India for their contribution to our life and society.

I always come back to the city of dreaming spires and of lost causes as a student. Mr Chancellor, I am here this time in all humility as the representative of a great nation and a great people.

I am beholden to you, Mr Chancellor, and to my old university for the honour that I receive today.

(Prime Minister Manmohan Singh was conferred with an honorary degree by the Oxford University July 11. This is his acceptance speech.)