Clamour to adopt orphans of tsunami 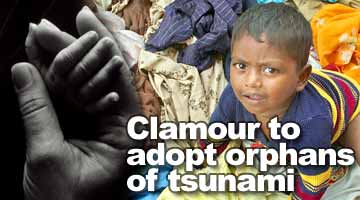 'If you could please send me information on how my family could adopt an orphaned child of the tsunami. We want to help. We live in the United States. Cindy Shelton 317 Township Dr Centerton, AR 72719.'

Such messages are pouring in from across the world for the tsunami-hit orphans of southern India.

More than a week after the disaster, relief camps where these children currently live have been swamped with requests for adoption.

The worst hit district in Tamil Nadu, Nagapattinam, with a toll of nearly 6,000, has the largest number of orphans, according to officials.

District Collector M Veera Shanmugha Moni says the administration is getting lots of enquiries from India and abroad."Many people have come forward to adopt the children who have suddenly become orphans."

Our Lady of Health Shrine Rector Father P Xavier, at Velankanni, where some 1,000 people -- most of them pilgrims and fishermen -- died, is also getting a lot of enquiries.

"Children have suffered the most in this tragedy and the church itself is planning to open a centre for the orphaned children to look after and educate them," says the priest.

Fr Xavier says the time is not ripe for sending these children abroad. "I think the government and voluntary groups have to join hands to help these children here itself, rather than packing them off to any foreign country."

The sight of so many orphans has moved Tiruvarur district Collector P Ekambaram. "I have decided to adopt this child," he says looking at an orphan while walking around a relief camp.

But is the process for adoption easy?

"The Tamil Nadu government has to take a policy decision in this regard. It is not just easy to send off these children as orphans to be adopted at this juncture," says an official overseeing relief operations in Cuddalore.

He says the number of orphans should be counted first. "We need to then ensure that their parents are dead. Officially, their deaths have to be recorded and the children declared orphans under various districts."

According to him, handing over the children to adoption agencies and voluntary groups screened by the government comes first.

Compared to Indians, foreigners will have a tough time.

For instance, the immigration of adopted Indian children to the United States is a complicated procedure.

Two years ago, a case involving sale of children was exposed in Andhra Pradesh. At that time the US consulate in Chennai and the Indian government came out with a clarification detailing the laws relating to adoption.

1. Indian law has no provisions for foreigners to adopt Indian children, but under the Guardian and Wards Act of 1890, foreigners may petition an Indian district court for legal custody of a child to be taken abroad for adoption.

2. Following a 1984 Indian Supreme Court decision, non-Indians are required to work through an adoption agency in their home country that is licensed in accordance with local law and appears on a list of agencies approved by the Indian government.

3. Only an Indian agency recognised and listed by the Indian government may make children available for adoption by foreigners.

4. US citizens desiring to adopt Indian children have to file an I-600A petition before the Immigration and Naturalisation Service office in America. They have to submit the following documents before INS: (a) Court order regarding legal custody of the child; (b) Evidence that the child is an orphan; (c) Birth certificate of the child; (d) Two photographs of the child; (e) Payment of required fees.

5. In India, the foreign adoptive parents have to submit the following documents: a. Fingerprints of petitioner (and spouse, if married); b. Home study documents from an authorised agency in the US where the child will be adopted; c. Proof of petitioners' US citizenship (passport or birth certificate); d. Evidence of financial support; e. Payment of the filing fee.

6. Once the petition has been approved by INS and forwarded to the consular section at the US embassy or consulate, the adopted child must apply for an immigrant visa. The child must appear in person, but there is no requirement that the adoptive parents appear as well. Often someone from the child welfare agency will bring the child to the consular section for the visa and subsequently accompany the child to the US.